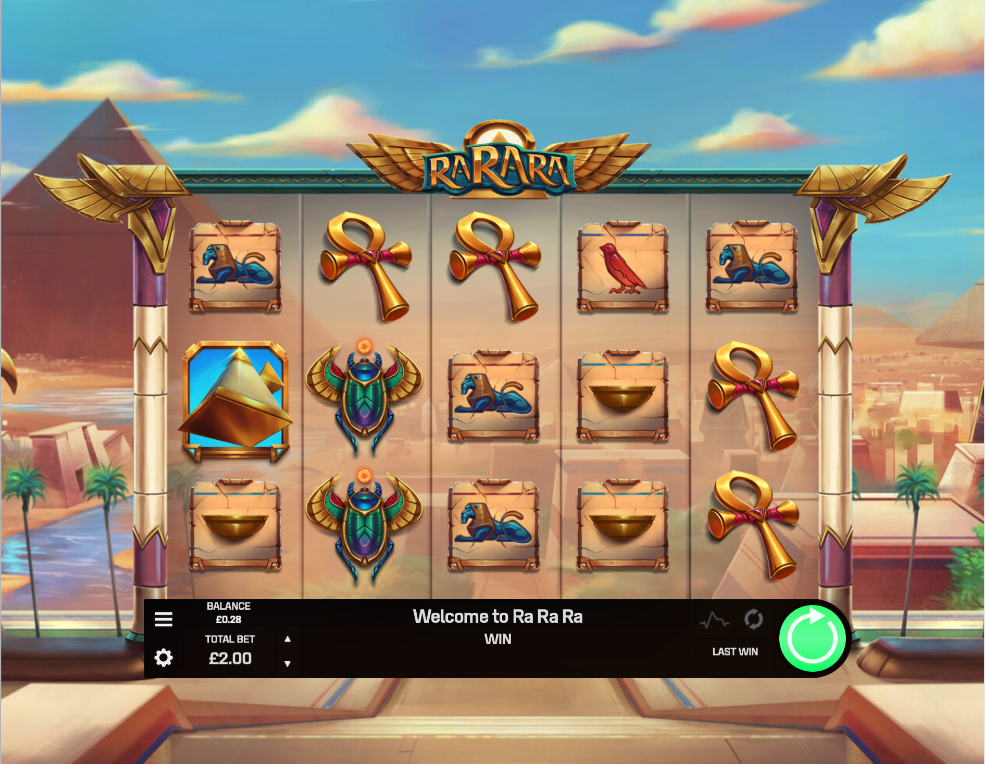 Ancient Egypt is once again our destination now as we take a look at this online slot from Golden Rock Studios; it’s called Ra Ra Ra as a nod to the Egyptian god of the sun but it also offers players Wild Guide respins and free spins.

Ra Ra Ra is a five reel slot with three rows and ten fixed paylines; gigantic pyramids dot the horizon, piercing the blue sky as they loom over the blocky, traditional buildings.

High value symbols include the floating pyramid, the Ankh, the scarab beetle and the Eye of Ra; hieroglyphics and candle holders represent the lower values. The three godly characters are all wild and appear on reels two, three and four, triggering one of the features when they do. The pyramid is the special symbol.

This feature is triggered each time a stacked wild symbol lands on reels two, three and four; each wild in view will now award one ‘win spin’ which means that the reels spin until a win is achieved.

Landing at least one wild symbol on reels two, three or four and the pyramid on reel one will trigger this feature (it can also be won from within the Wild Guide); you’ll now receive two free spins with an extra one awarded until there’s a win. Those original triggering wilds and any new wilds will stick in place until the round ends. Between two and five extra spins can be won by landing another pyramid on reels

Ra Ra Ra is not only a rousing cheer for the sun god but it’s also an enjoyable and high quality slot with two bonus features which trigger regularly – especially the Wild Guide. One of the better trips to Ancient Egypt.