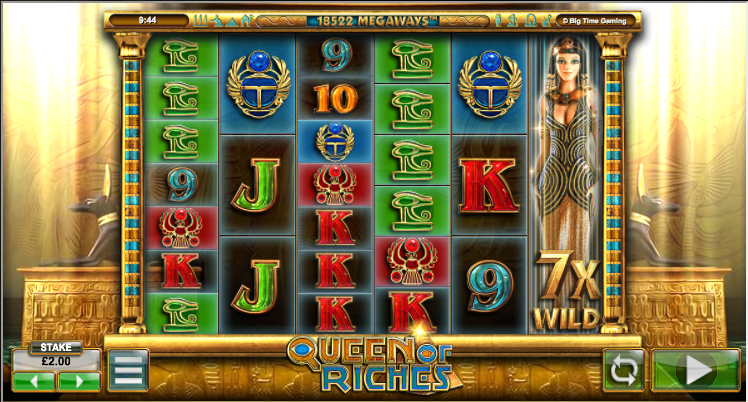 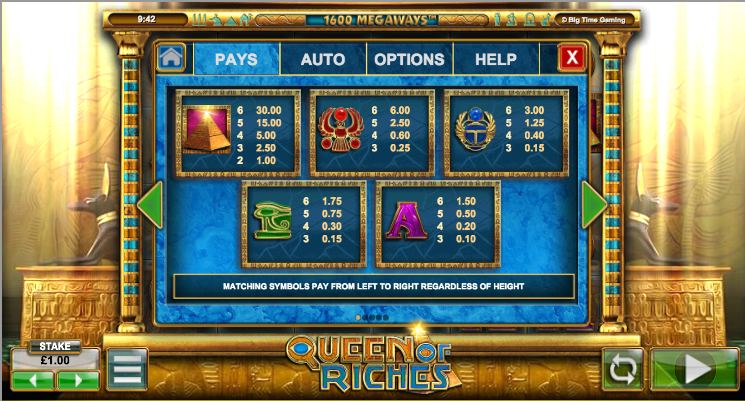 Online slots with an Egyptian theme turn up with a metronomic regularity and that’s fine as long as they offer a decent playing experience. We like Big Time Gaming slots in general and this time they have developed one called Queen Of Riches – it features several clever base game features and you can read more about it below.

Queen Of Riches is a six reel slot with up to seven rows which leads to an astounding 117649 potential paylines; those reels spin between blue and gold pillars while Anubis rests on stone platforms on either side.

There are four theme-related symbol including a pyramid and three coloured representations of gods – red, blue and green. Lower values are the standard 9, 10, J, Q, K and A.

There are no wild or scatter symbols but there are wild reels which are explained in more detail below.

Full wild reels can appear on reels two to six and and will substitute for all those symbols on that particular reel (3-7). A winning combo including a wild reel will multiply that win by the number of symbols on the reel; additionally any more wild reels contributing to a win will be multiplied together so 2 full wild reels would a total of 49x (7×7).

On each spin between two and six reels are ‘cloned’ so they result in the same symbols on those reels (as shown in the video above) – this can obviously result in some big wins for lucky players. Wild reels can also be cloned for a bit of extra money-making potential.

Queen Of Riches incorporates some clever bonus features into the base game which results in a pretty seamless gaming experience – it’s very enjoyable and comes with an RTP of 96.90%.