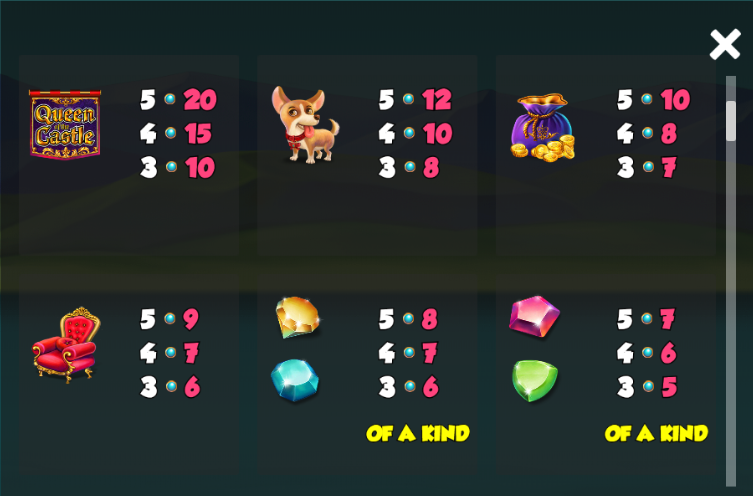 In centuries past it wasn’t just men who rose to power through the lottery of lineage – women did too and this online slot from NextGen Gaming is themed on one such fictional ruler; she’s the Queen of the Castle and she reigns over a land in which bonus features and free spins are bestowed upon its citizens.

Queen of the Castle is a five reel slot with three or four rows and five hundred and seventy six ways to win; the reels spin within the halls of the castle which stands on a small island within a lake – ideal protection from external invaders.

The high value symbols include the game’s logo, a small dog, a pouch of gold, a plush red chair and four gems of orange, pink, blue and green; J, Q, K and A make up the lower values.

The Queen is wild and she will substitute for all others to help form winning combinations except for the shield bonus symbol.

After level four you can keep filling the meter to receive six more free spins.

The red and purple chests offer the following features for filling up reels one and five respectively:

If reels one or five are partially filled by their respective chests, there’s a chance that the reel will be nudged to fill that reel and trigger the feature.

This can occur randomly before any spin and you will see vines wrap around reels two, three and four; these symbols will match and lock together for the next spin.

Queen of the Castle is a slot with plenty of bonus features to offer along with some cute, cartoonish graphics and charming sound effects; it’s fast-moving and not too tricky to trigger the bonuses, especially with the red and purple chests. This game comes with an RTP of 96.51%.