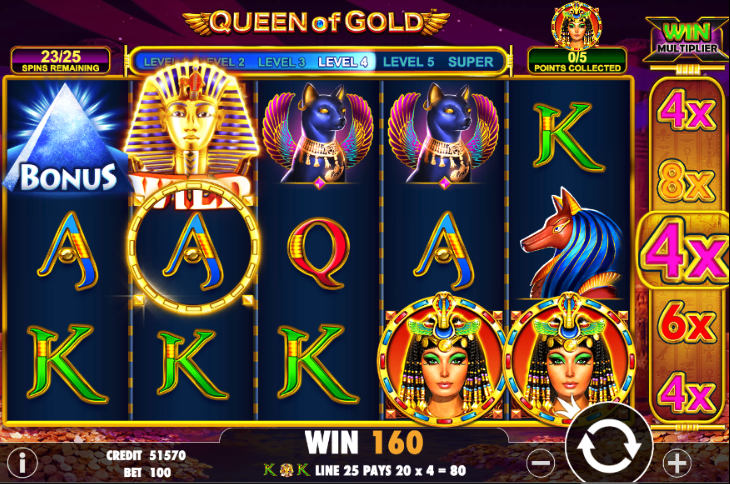 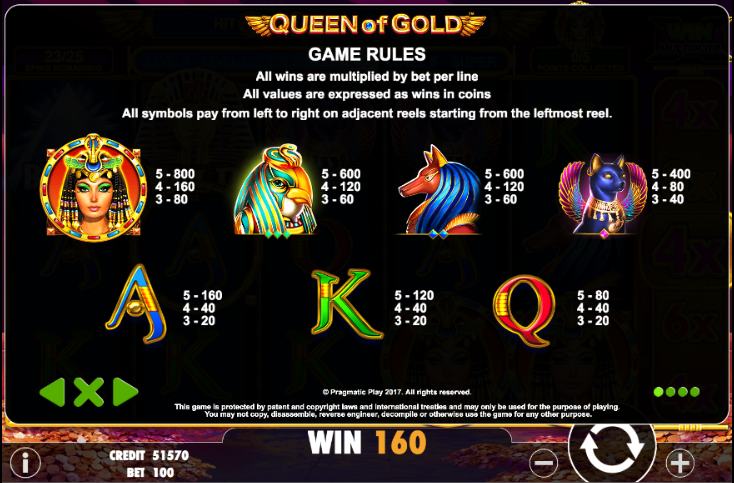 Ancient Egypt has been a fertile source for developers of online slot machines over the years but there’s always room for me and here we have Queen of Gold, a release from Pragmatic Play with several inventive features.

Queen of Gold is a five reel slot with three rows and twenty five fixed paylines; there’s a setting sun behind the reels and a multiplier reel on the right hand side which we’ll explain in a bit.

The high value symbols include the Queen (Cleopatra perhaps) and three representations of various Egyptian gods; Q, K and A make up the lower values.

The golden sphinx is wild and it will substitute for all others to form winning combos except for the glowing pyramid bonus symbol.

The multiplier reel on the right hand side spins with each game and it will apply a multiplier to any win on that spin; the values on the reel increase as you move up through the levels (explained below). A joker on the sixth reel will increase your level instantly.

You may have noticed the gold ring which is present on the reels and the levels shown above them; each time the Queen symbol lands in the gold ring you’ll collect one point towards the five needed to move to the next level. You can move the ring before each spin if you want but if you fail to move up a level within twenty five spins you’ll drop back to level one – the remaining spins are shown in the top left hand corner.

The goal is to move all the way to Super level and each successive level will increase the multiplier values in the sixth reel.

This is triggered by landing three of the glowing pyramid bonus symbols anywhere on reels one, three and five; you will receive ten free spins which can be retriggered unlimited times with more pyramids.

Queen of Gold brings several new features to the genre of Egyptian slots and that’s always a welcome thing; the multiplier reel adds some action and there’s some interactivity with the gold ring. Check it out – it comes with an RTP of 96.50%.