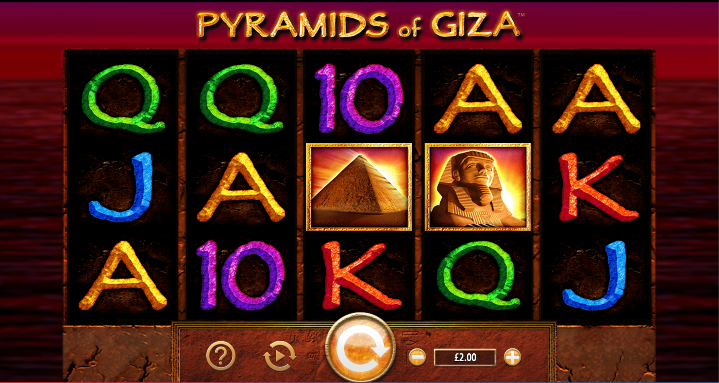 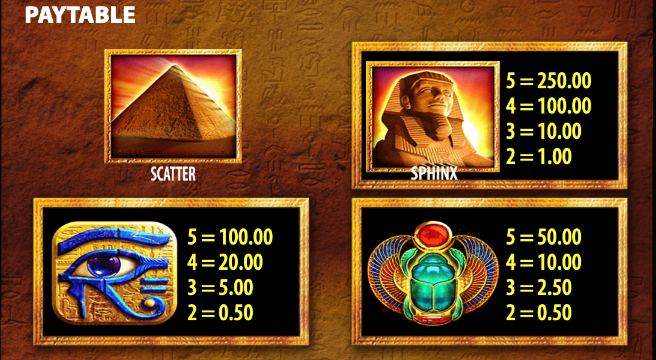 If death and taxes are two of life’s certainties then a third is that before long another online slot will be developed themed on Egyptian gods, pyramids and the like; there are already dozens of them and to add to that number we can introduce you to Pyramids of Giza, a release from Barcrest with some tried and tested godly symbols and plenty of free spins.

Pyramids of Giza is a five reel slot with three rows and ten fixed payline; those reels spin within a stone tablet which sits against a dark backdrop of dusk in the North African desert.

There are just three high value symbols – the Eye of Ra, the scarab and the flower – while the lower values are represented by 10, J, Q, K and A.

The sphinx is wild, it appears on all reels and it will replace all other standard symbols to help form winning combos; the pyramid is the scatter symbol and key to the main feature.

This is triggered by landing three of the pyramid scatter symbols anywhere on reels one, three and five for which you will receive ten free spins; more spins can be earned by landing three more pyramids during this feature. There are no extra enhancements during the spins.

There’s nothing particularly wrong with Pyramids of Giza but we just expect a little more these days, especially given the vast number of slots with this theme already out there; it’s a touch too simple but there is an oddly pleasing solidity and high quality about the symbols. If you enjoy this theme then you’ll probably appreciate this game.