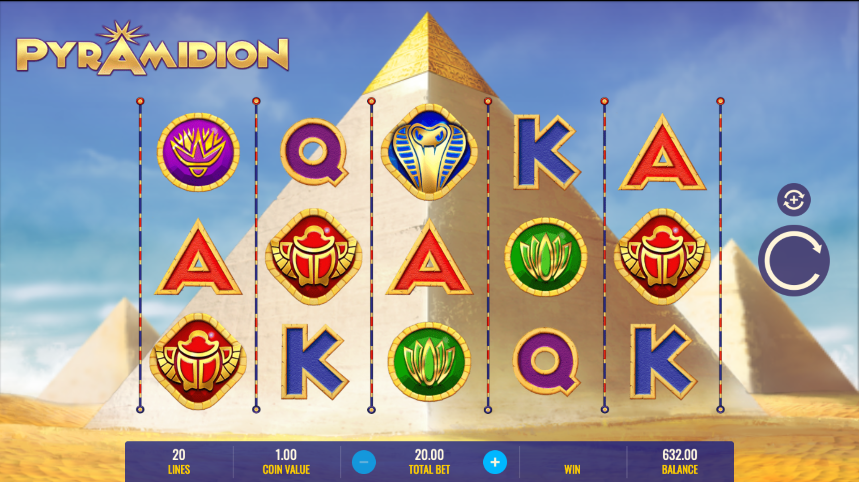 A virtual trip to Ancient Egypt is a regular occurance for fans of online slot machines and here we have one opportunity to visit North Africa with Pyramidion, a release from IGT with some smart looks and a whole host of bonus features.

Pyramidion is a five reel slot with three rows and twenty fixed paylines; the pared-back design sees the symbols spinning on transparent reels through which gold-topped pyramids shine in the desert sun.

The higher value symbols are stylised representation of various deities while the lower values are the standard J, Q, K and A.

The wild is a big, red ‘Wild’ which will replace all standard symbols to help form winning combinations; the pyramid, the ‘Bonus’, the Tomb of Power and the Tomb of Mystery are the special symbols.

Landing two or more pyramids anywhere in view triggers one of the following mini-features:

Tomb Of Power – awards 8 free spins with a Power Meter which increaes by one with each spin; whenever a wild lighting bolt lands it will be joined by a number equal to the Power Meter and award one more spins.

Tomb Of Mystery – awards free spins with a wild reel staring on reel five; on each spin it will either move left ort styay in place and increase the win multiplier by 1x. Spins end when the wild reel reaches the left hand side.

Pyramidion is a very playable addition to the hordes of Egyptian-themed slots and it comes with a number of potentially lucrative and enjoyable bonus features – highly recommended.