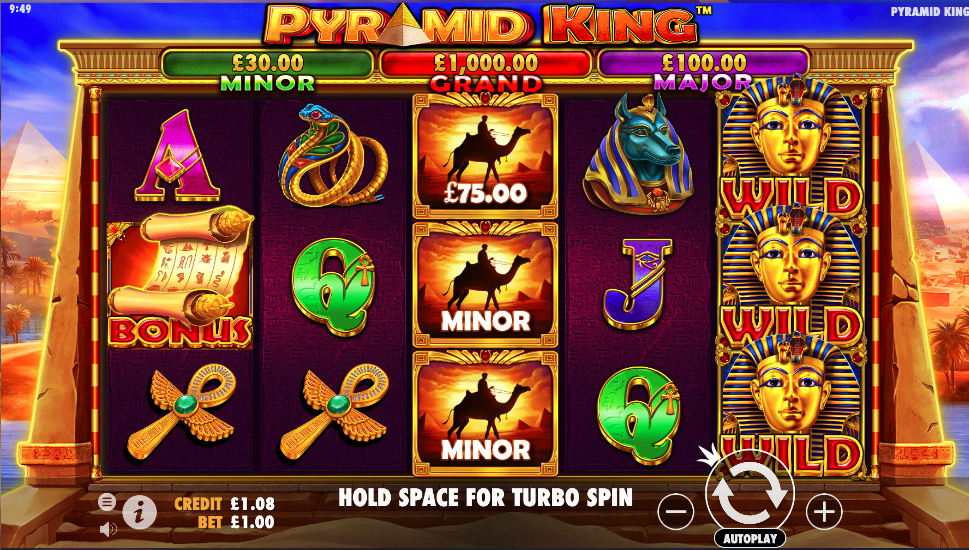 Egypt is a regular virtual destination for those of us who like to spin the reels and here we have the chance for another visit in the company of Pyramid King, this colourful release from Pragmatic Play; jackpot prizes and free spins await those willing to explore this ancient land.

Pyramid King is a five reel slot with three rows and twenty five fixed paylines; the three jackpot prizes are displayed above those reels which spin within the columns of a grand entrance. Pyramids, palm trees and the River Nile occupy the background.

The high value symbols include the god Anubis, a gold ring inlaid with a green jewel, a golden serpent and an ankh; J, Q, K and A make up the lower values. The Pharaoh’s mask is wild and it will replace all symbols except for the scroll and the camel to help create winning matches.

Landing at least three of the scroll scatter symbols anywhere in view will awards an initial ten free spins but these can be retriggered indefinitely; before the spins start one standard symbols is selected at random to expand when it appears – this symbol does not need to be on adjacent reels to win but you’ll need at least three on a payline.

The camel will always appear displaying a cash amount proportional to your stake or the Minor or Major jackpots; landing six of these anywhere will trigger the Money Respin and they will now lock in place. The remaining reels now only contain camels or blanks and you’ll get three respins in which to land more camels – each time you do the spins will reset to three again. The round is over when no more camels land during those three spins at which point you’ll receive the total of all amounts shown; if all positions are filled the Grand Jackpot is also awarded.

Pyramid King doesn’t deviate too far from a well-trodden road in terms of gameplay and theme but it’s been a pretty successful one until now so why mess with a winning formula? Both features have the potential to pay out some big prizes.