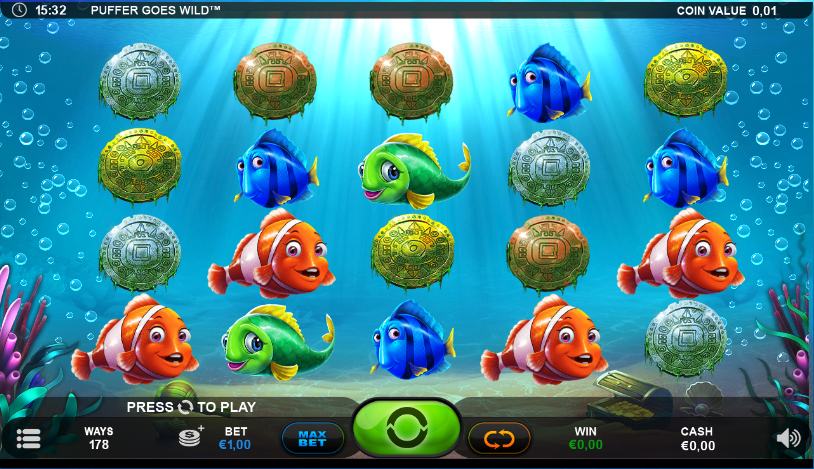 The bottom of the ocean is a frequently visited location for online slots fans and here we have another chance to dive down to the depths with Puffer Goes Wild, a release from Plank Gaming with a shark and a puffer fish providing the action during the free spins.

Puffer Goes Wild is a five reel slot with four rows and one hundred and seventy eight ways to win; it’s a charming-looking game in which the fishy symbols float in clear water close to the sea bed, accompanied by a steel drum soundtrack.

There are just six standard symbols – fish in orange, green and blue along with gold, silver and bronze coins as the lower values. Those coins are obscured by algae and have clearly been resting on the ocean floor for some time.

The wild is a large air bubble which appears only on reels two, three and four and which will substitute for all others to help form winning combinations except for the Sharky and Puffer special/wild symbols.

This is triggered by landing Sharky on reel one and Puffer on reel five on the same spin; you’ll now receive free spins in which the Puffer moves one position to the left on each spin until it reaches reel one. Both these special symbols act as wilds during this feature.

Any further Sharkys landing on reel one will help Puffer expand – first to 2×2, then 3×3 and finally a huge 4×4 symbol which should certainly help out with some hefty wins.

Puffer Goes Wild is a fine addition to the large shoals of fishy-themed slots already out there – the graphics are of a very high quality, the feature is creative and there’s an enticing soundtrack to accompany your gameplay.