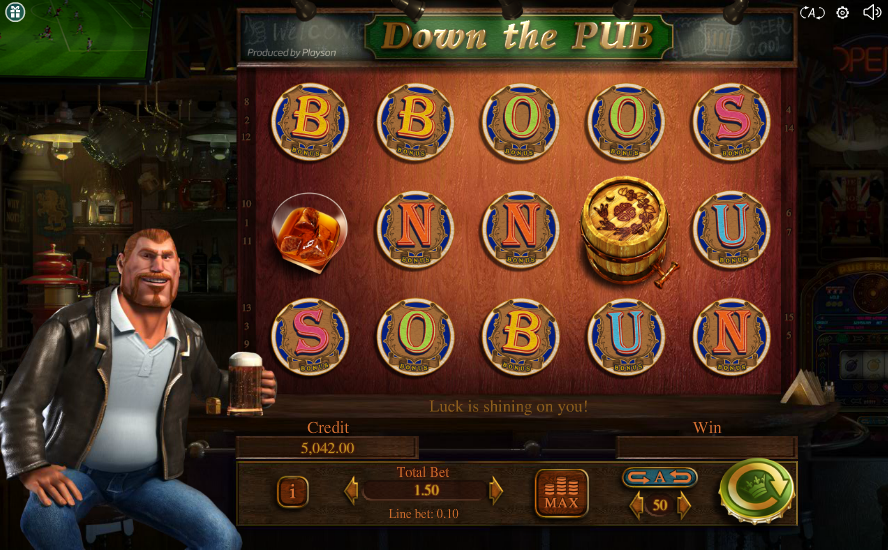 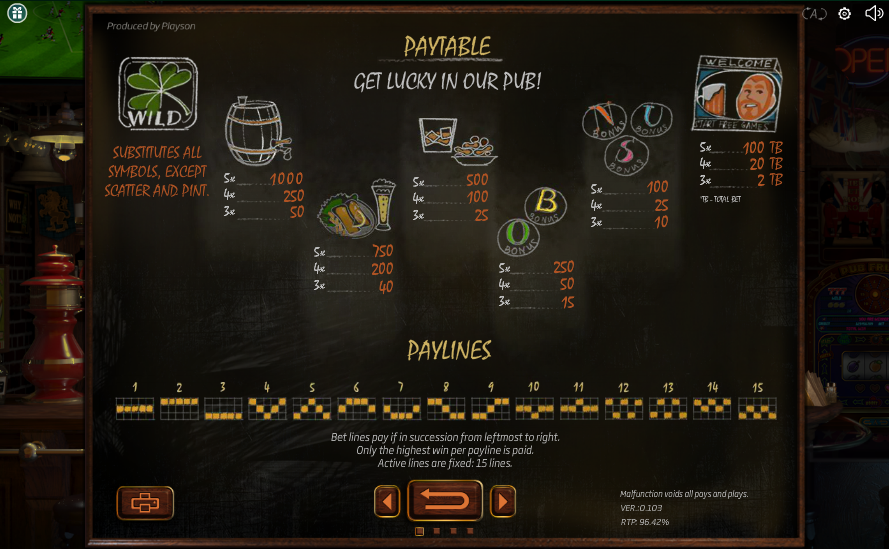 There are very few things that beat an evening at the pub but playing an online slot which is based on that particular activity must come fairly close; this is Down The Pub, a game developed by Playson and featuring a bonus game which replicates a fruit machine – read all about it below.

Down The Pub is a five reel slot with three rows and fifteen fixed paylines; the setting is of course the interior of a pub and the symbols spin on a wooden background alongside a large chap sitting at the end of the bar enjoying a drink.

The symbols are all related to the theme and include a beer keg, a ploughman’s lunch, some snacks and then the letters ‘B’, ‘O’, ‘N’, ‘U’ and ‘S’ on beer mats. These also have a use in one of the bonus features explained below.

The wild symbol is a clover which will replace all others to form winning combos except for the drinker scatter icon and the pint (in free spins).

This is triggered by landing three of the drinker scatter symbols anywhere in view; the free spins will now start and continue until three pint glass symbols have appeared. The pints aren’t all bad because the first one will apply a 2x multiplier to any wins, the second a 3x multiplier and the third a 10x multiplier. After that third pint you’ll get one more free spin.

Trigger this by landing the letters B, O, N, U, S on reels one to five in that order; you now get to play a classic fruit machine combined with a trail and each spin will award moves around this trail. There are plenty of extra features here including nudges, boosts, jackpot wins and multipliers prizes.

You being with three lives and the round is over when you’ve found three bombs, each of which removes one life.

Down The Pub is particularly impressive in that it includes a fruit machine-based bonus game within a standard three reel slot; the graphics are great, there’s a nice amount of humour involved and it comes with an RTP of 96.42%.