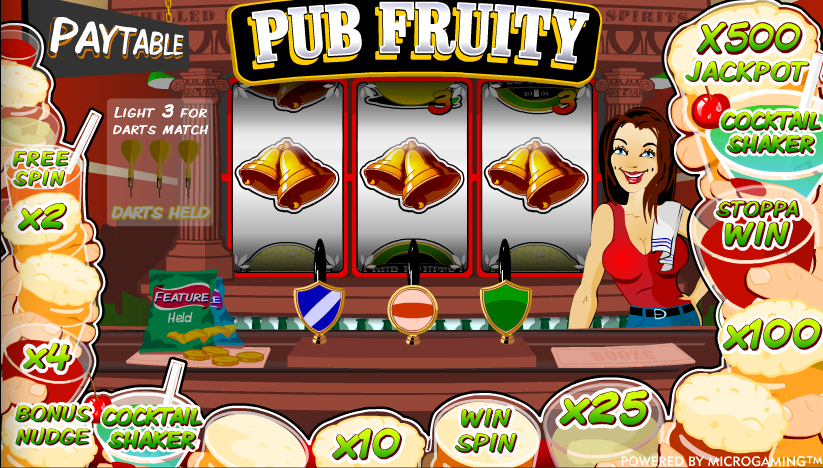 Microgaming do a great line in UK-style online slots; these are games more commonly known as fruit machines here in the UK and they are a constant presence in pubs, cafes and chip shops around the country. Pub Fruity is another addition to the line up which is themed on that most British of cultural icons – the pub.

Pub Fruity is a three reel slot with just one payline and it’s set firmly in a  traditional pub. The reels spin behind the bar of this hostelry and the three beer taps in front are the nudge buttons. There’s a smiling barman to one side of the reels and packet of crisps to the other.

There’s a traditional range of fruit machine symbols on show including cherries, lemons, oranges, grapes, melons, bars and bells but the jackpot symbol is a Pub Fruity beer mat.

You will notice a long line of drinks framing the reels and this is the bonus feature which is applicable in the base game. Some of the symbols on the reels also contain numbers and that’s the number of places you will move along the trail. The further along the trails you get, the bigger potential rewards there are although the multipliers will only be applicable if that spin has resulted in a win.

If the crisp packet is lit, the trail will be held in place for one more spin.

Occasionally a dart will accompany a symbol on the reels and if it does, one of the shaded darts to the left of the reels will be lit. If you can light up all three spaces before they are no longer held you will trigger the Darts game.

Your task is to pick one of three characters shown and they will then throw three darts each. The better your chap ranks, the higher the multiplier of your stake you will win with a top prize of 1000x.

Nudges are won here by moving eight places along the Drinks Trail; you can then jog individual reels down to try and make a winning combo or collect more numbers.

We always like these fruit machine-style slots and this is no exception; it’s very hard to trigger that Darts game though so don’t bank on managing that while you’re playing.