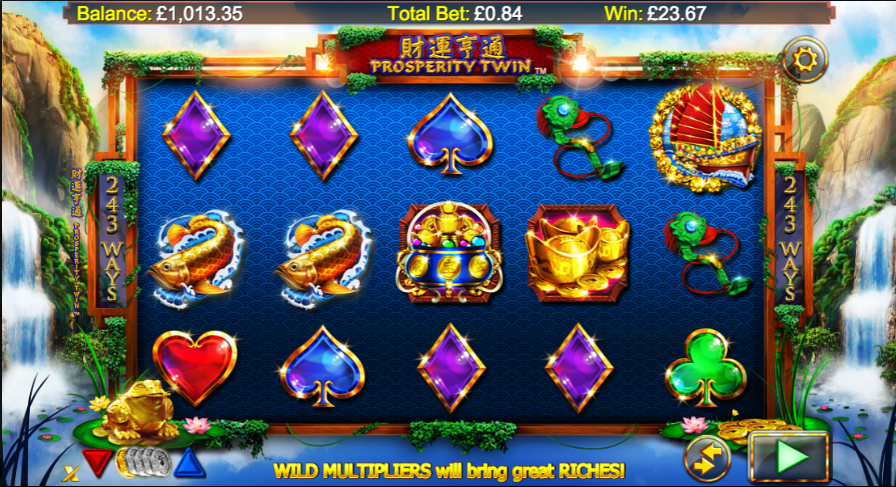 Every online slots developer has their own range of oriental-themed games and NextGen Gaming is no exception; this one has the intriguing title of Prosperity Twin and it includes a free spins feature and the option to use paylines in both directions – read all about it here.

Prosperity Twin is a five reel slot with three rows and 243 ways to win which means that winning combos can be formed as long as there are matching symbols in adjacent rows starting from either end (if you’re playing both directions). The wooden reels are festooned with greenery and sit against a backdrop of rocky hills and waterfalls.

The higher value symbols are all intricately designed and include a Chinese junk, a dragon, an abacus, gold ingots, a Koi and a mysterious green/red item; coloured playing card symbols represent the lower values.

The wild symbol is a selection of Chinese coins which appears only on reels two, three and four and they will replace all others to form winning combos except for the golden Kanji character; in addition the wild will apply a multiplier of between 2x and 8x for any wins to which it contributes.

Players have the option to play from left to right or both ways and there’s a built-in reason to play both ways because it costs less than double the cost (50 coins) of playing one direction (28 coins). Make your selection by using the little arrow button next to the ‘Spin’ button.

This is triggered by landing three, four or five of the Chinese character scatter symbols anywhere in view for which you will receive 8, 18 or 28 free spins respectively; landing two scatters during this round will award 2, 6 or 8 extra spins.

Prosperity Twin is a very detailed game with some lovely graphics and in our experience there are some big wins waiting in the free spins round as re-triggers are very common; it’s a worthwhile diversion and it comes with an RTP ranging from 95.45% – 96.29%.