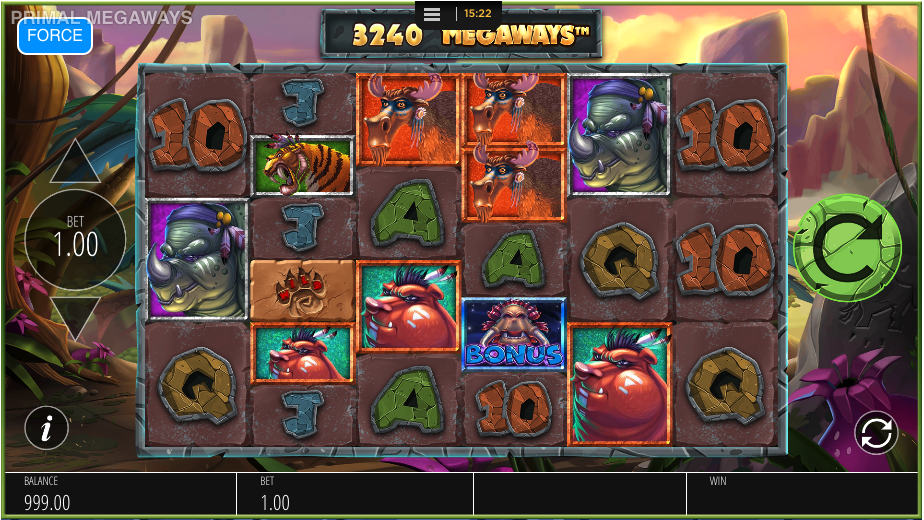 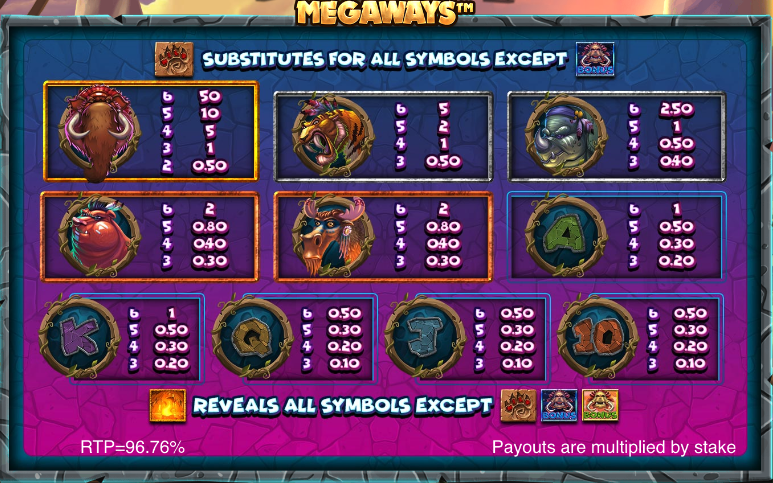 The primeval world of the dinosaur is the setting for this online slot machine from Big Time Gaming with its wild features and jurassic free spins; it’s called Primal Megaways and it’s an enjoyable stampede through the land that time forgot.

Primal Megaways is a six reel slot with variable rows and up to 46656 ways to win; the giant number of paylines is made possible because the symbols are different sizes – smaller symbols means more paylines. Rocks and strange flora provide the backdrop to the stony reels.

The higher value symbols are a range of ancient creatures including a woolly mammoth, a sabre-toothed tiger, a rhino, an elk and a red thing we can’t quite identify; 10, J, Q, K and A represent the lower values.

The pawprint is wild, it appears on reels two to five and it will replace all other symbols to help form winning combos except for the tusk bonus icon.

On each spin each instance of the fire symbol will transform into one of the other standard symbols to potentially help out with a few wins every now and then.

This is triggered by landing at least three of the tusk bonus symbols anywhere in view for which you will receive the following:

If a wild lands it will reveal itself to be one of the above multiplier values and that will be applied to any wins on that spin.

If you fail to win at least 10x your total bet during the spins then you’ll receive the same number of spins again to jack your total up.

Primal Megaways is an enjoyable addition to the Megaways series of games from BTG with its cohort of scary creatures and in particular the free spins guarantee which means that the bonus round will always result in a decent payout. Give it a go, it comes with an RTP of 96.76%.