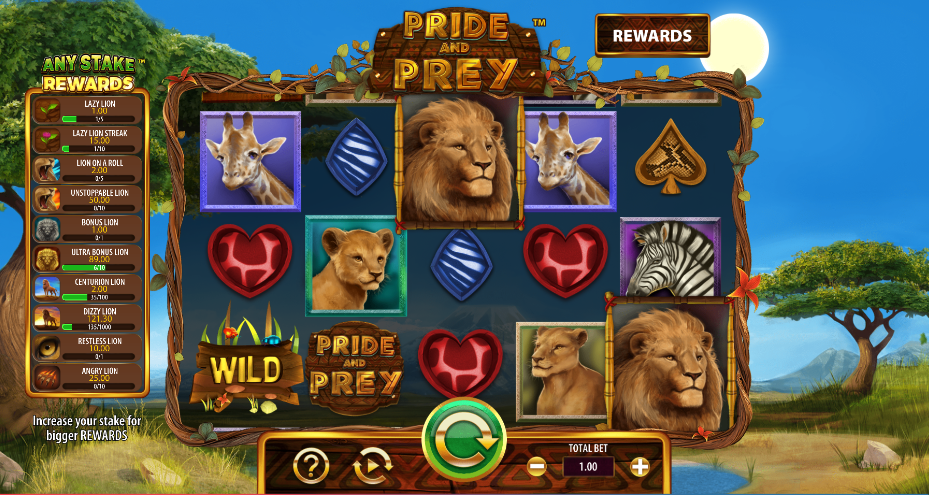 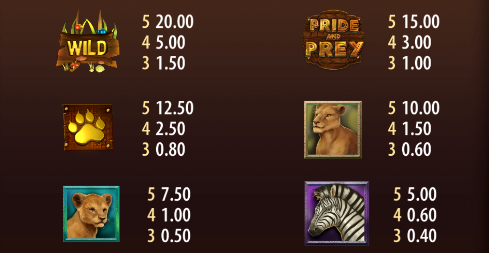 The wide sweeping savannahs of some unnamed African country are the setting for this safari-themed online slot from Red7; it’s called Pride and Prey and it comes with a clever ongoing reward system and plenty of free spins.

Pride and Prey is a five reel slot with three rows and twenty fixed paylines; vines encompass those reels which float against a backdrop of blue skies, dry grass and the occasional thirsty tree. The rewards ladder is on the left hand side of the screen.

The high value symbols include the pride and Prey logo, a paw print, two lion cubs, a zebra and a giraffe; playing card symbols with animal stripes represent the lower values.

The wild symbol is a sign saying ‘Wild’ and it will replace all others to help create winning matches except for the lion scatter icon.

To the left of the reels you’ll see the list of various rewards which are completed and won by achieving various objectives:

If you’d rather not see the list of rewards just press the ‘Rewards’ button in the top right to make it disappear.

This is triggered by landing three lion scatter symbols anywhere on reels one, three and five; you’ll receive an initial 8 free spins but four more spins can be won by landing three more lions.

There are no wild symbols on the reels but after each spin sets of symbols may be slashed, turning them wild.

The big attraction in Pride and Prey is the reward system which makes it seem as though there’s another payout just around the corner and that you’re not just relying on symbol combinations; it’s clever stuff and creates a compelling slot when combined with the free spins and a high RTP of 97.52%.