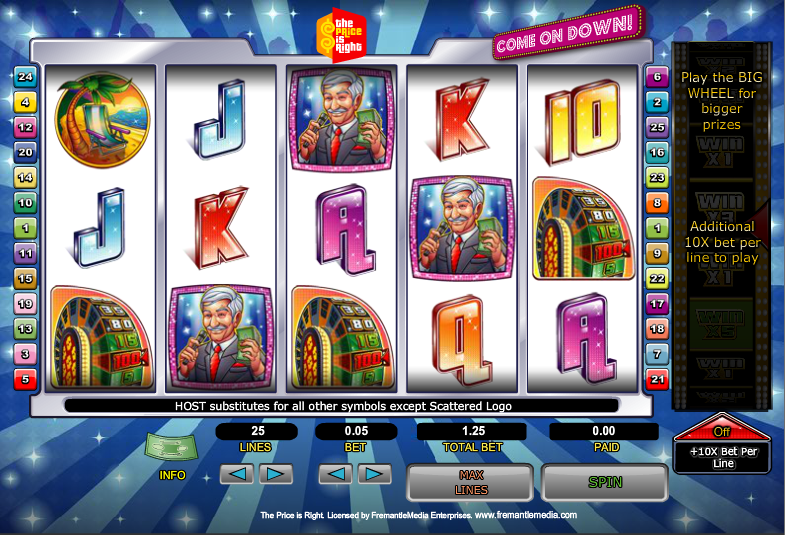 Slots fans of a certain age will certainly remember The Price Is Right television show; in the UK it ran in fits and starts from 1984 to 2007 but its heyday was surely the reign of Leslie Crowther in the early years.  Contestants would estimate the cost of various items for a chance to win them and this online slot from Random Logic brings some of the aspects of the show onto the reels.

The Price Is Right is a five reel and twenty five payline slot with several bonus features which places you on the set of the TV show and invites you to ‘Come On Down’.  The main symbols are prizes such as a holiday and a car, the Wheel of Fortune and the host’s female assistant.

The silver-haired host himself is the wild symbol who also triggers the mini-game and the game’s logo is the scatter which activates the Showcase Feature.

If you’d like to wager a little bit more per spin, click the little red arrow in the bottom right hand corner to opt in to the Big Wheel Bonus.  You need to be playing maximum paylines and it will also cost you an extra 10x your line bet but after each spin you’ll get to spin the wheel, awarding you a multiplier if you’ve won on the reels or entry into the mini-game.

Additionally any scatter prizes you win in the base game are multiplied by 25x.

Three of the host scatter symbols anywhere on the reels will win you the following choice of mini-games:

This was the final game in the TV show and you’ll get to play it here if you can land three of the logo scatter symbols on the reels.  You’ll see a board with seven positions with a car in the seventh place.  You’ll then be shown two items to be placed in slots one and two, then three and four, then five and six and each time you must place them in price order.

Each correct pick wins 5x your bet while 100x that wager is available if everything is correct.

For extra excitement we’d always recommend paying a little more for the Big Wheel bonus; the percentage return to the player of course remains the same but the enjoyment is greater.

What a great slot based on a classic television show; loads of bonus features, cheesy animations and a base game Wheel of Fortune to help you on your way.