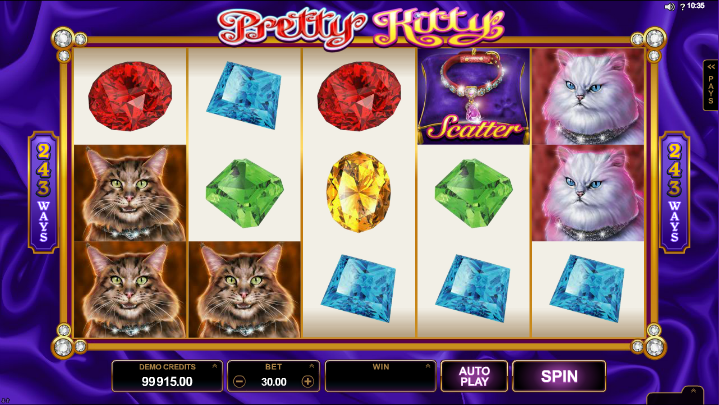 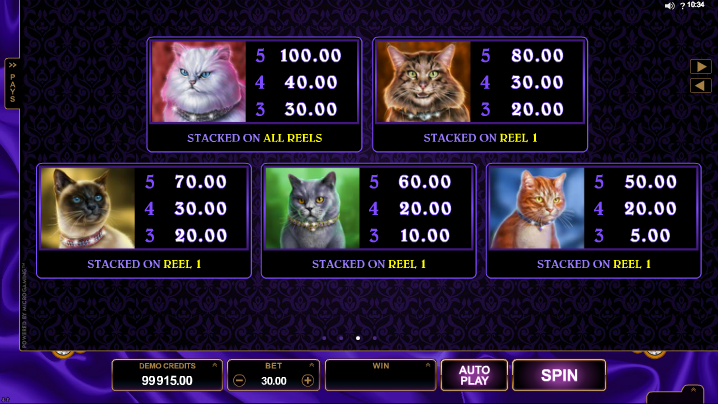 Brand new from Microgaming is an online slot based on man’s favourite – or possibly second favourite – pet. That’s right – it’s all about cats and it’s called Pretty Kitty. Pretty Kitty is the story of several extremely pampered cats whose owners lavish them with diamond collars and the like. Read on to find out all about these slightly creepy-looking kitties and the bonus features.

Pretty Kitty is a five reel slot with three rows and 243 ways to win; the reels are adorned with white jewels and the whole structure sits on a backdrop of plush purple fabric – the poshest cat cushion in the world.

Five cats represent the higher value symbols and these are a white one, a tabby, a Siamese, a grey one and a ginger; variously-coloured jewels make up the lower values – red, orange, yellow, green and blue.

The Pretty Kitty logo is wild and it will replace all others except the scatter – that’s a diamond collar and it’s the key to the main feature.

All cats can appear stacked on the reels and if all positions on reel one feature the same moggy as part of a winning combo, that cat will also expand where it appears on the other reels.

This is triggered by landing three or more of the collar scatter symbols anywhere in view; you will now receive fifteen free feline spins but now reel one also contains stacked wilds for each spin and any cat or wild on the other reels will also expand to fill their reel. More spins can be retriggered by landing more scatters during this round.

Pretty Kitty seems graphically fairly basic but the cats animate quite nicely when they feature in a winning combo; the background music is a bit like lift music but there’s a nice high RTP of 97.00%.