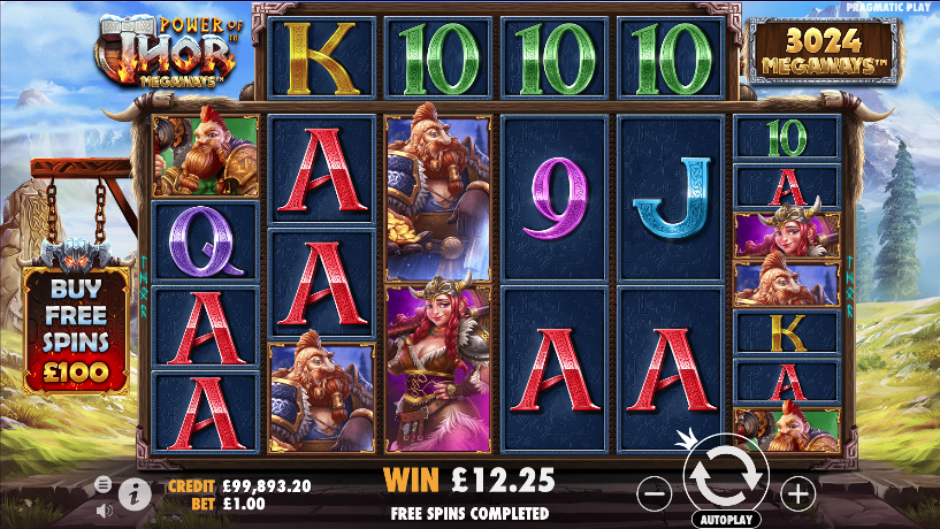 If you’ve been looking forward to an online slot in which the Norse God of Thunder meets Big Time Gaming’s Megaways payline structure then look no further and stand by to play Power Of Thor Megaways; it’s developed by Pragmatic Play and it comes with tumbling reels, free spins, the Hammer feature and up to 117,649 ways to win.

Power Of Thor Megaways is a six reel slot with up to seven rows on each reel and a potential 117,640 ways to win with those rows maxed out; the horizontal reel across the top adds to the fun and there’s a Scandinavian setting of pine trees, valleys and mountains whose peaks are in the clouds.

The high value symbols include Thor and three other scary-looking warriors from this story; 9, 10, J, Q, K and A represent the lower values. The gold ‘Wild’ is wild and it appears only on the horizontal reel; the special symbols are the gold letters which spell out ‘Thor’ and the hammer.

On each win every symbol in a winning combination will disappear and be replaced by more falling in from above – more combos can then be formed to continue the process.

The hammer is two positions wide and only appear on the horizontal reel; when it does land fully in view all symbols below will transform into wilds.

Landing four of the gold letters and spelling out the word ‘T’, ‘H’, ‘O’, ‘R’ will award an initial ten free spins with each extra letter handing out four extra spins. Winning 18 or fewer spins will allow players to gamble for four more up to 22 – be careful though because you could lose them all.

When the round starts each successful tumble will increase the win multiplier from that point on by 1x with no maximum. Three scatters during this round will award four more spins.

For those who enjoy an expensive risk some casinos will let players buy their way straight into the free spins for 100x the stake.

Power Of Thor Megaways is enjoyable stuff with plenty going on on the reels and a theme which integrates one of our favourite Avengers into the features very nicely. Highly recommended!

Power Of Thor Megaways is a Norse god-themed video slot from Pragmatic Play with six reels, variable rows and a potential 117.649 ways to win.

The Return To Player percentage for Power Of Thor Megaways is 96.55%.

How To Win On Power Of Thor Megaways?

Where can I play Power Of Thor Megaways?