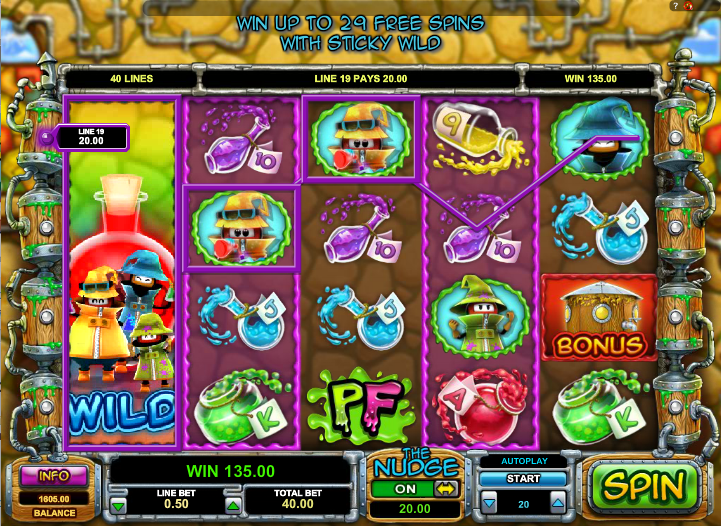 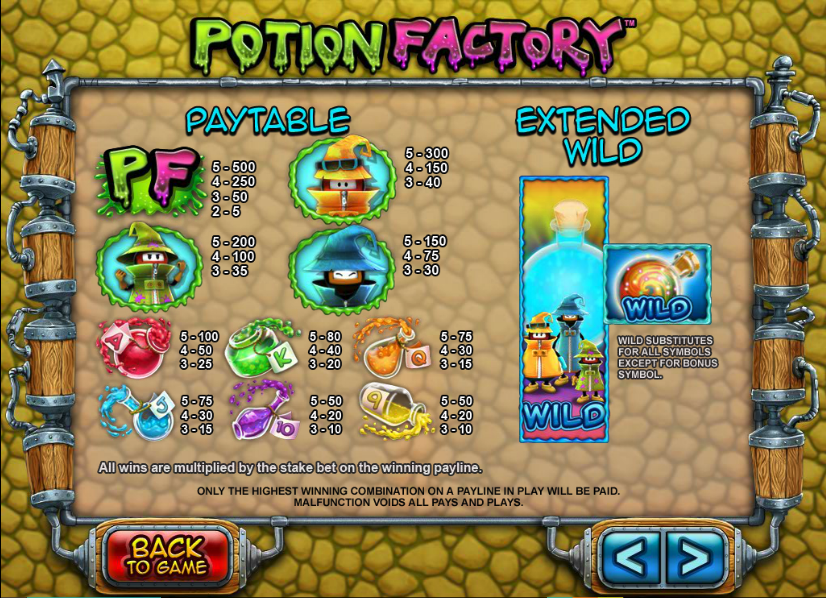 We look forward to testing out some of the new online slots more than others and Potion Factory is one we thought would be good; it’s from Leander Gaming who have a solid reputation for top quality slots and as soon as you load the game up you know it’s going to be good with great graphics and loads of bonus features.

Potion Factory has five reels and forty fixed paylines but it also has four rows which marks it out against most slots which have just the three.  As the name suggests it’s all about potions and the main symbols are the three colourful minions making those concoctions and a ‘PF’ logo.  Minor symbols are the potions themselves – yellow, purple, blue, orange, green and red.

Bonus symbols are a colourful, swirling potion wild and a wooden mixing tank bonus symbol which triggers the Multilevel and Multigame features.

The wild symbols appears on reels one, two or three and will randomly expand to fill the all the places on that reel; this gives you more chances to create winning combinations.

Fruit machine aficionados will appreciate the nudge feature; it’s automatic and will double your total bet amount but will allow the game to occasionally ‘jog’ a symbol into position on reels two, three and four to create a winning combination. In our experience it’s well worth the extra small investment and there are in fact up to three nudges available.

Landing three of the mixing tank bonus symbols on reels one, three and five will trigger this feature and the first thing you have to do is spin a wheel to determine your prize. So click the spin button and the pointer will stop on one of twelve places.  Each time you spin the reel you increase the prize level at which you are playing from one to three – three is the most valuable.

You will also notice from the screenshot below that each place on the wheel has a green ‘go’ sign or a red ‘stop’ sign.  Green will allow you another spin (and therefore increase you level) while red means that’s the end of the feature. 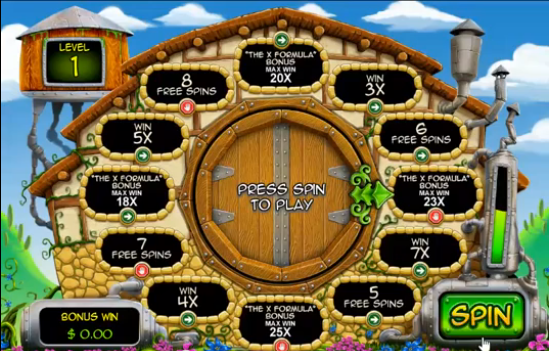 This is a great slot with an entertaining soundtrack, some nice touches of humour and loads of bonus features to keep you amused.  We recommend spending a bit extra for the nudge feature but of course you don’t have to.