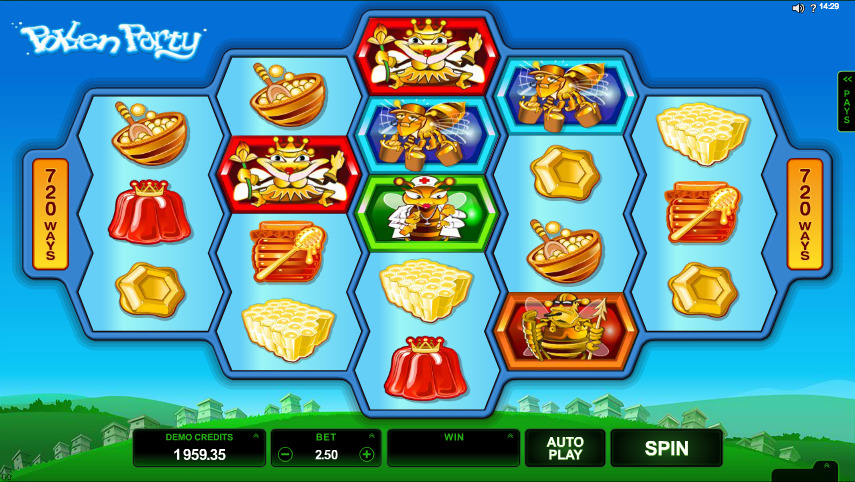 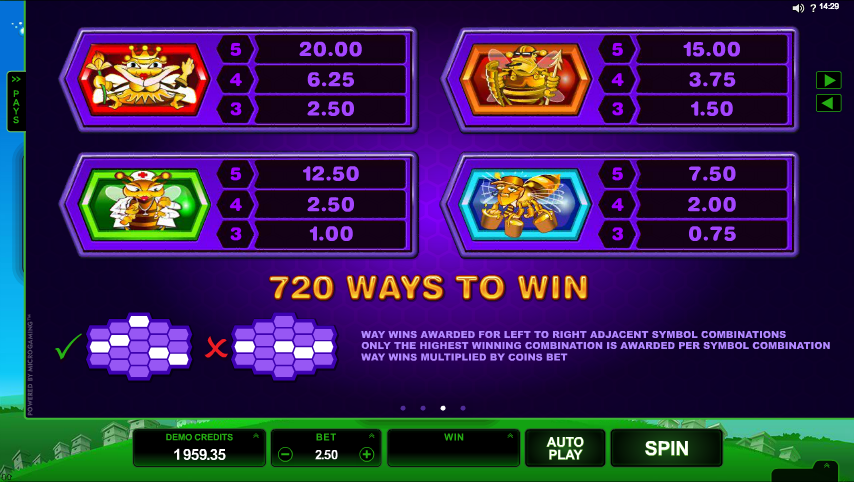 Available at all Microgaming casinos near you is this online slot machine themed on celebrating bees; it’s called Pollen Party and it follows the life of these environmentally important creatures as they enjoy their brief time to the fullest. Find out how it all works below.

Pollen Party is a five reel slot with variable rows (shaped not unlike a honeycomb) and 720 ways to win which means that as long as there are matching symbols in adjacent rows starting from the left hand side you’re onto a winner. The backdrop to those reels is a countryside setting under a blue sky with beehives scattered across the hilly landscape.

All the standard symbols are related to the reels and include the queen bee, a worker bee, a warrior bee a medical bee, some jelly, some honey, some honeycomb and a bowl of sugar.

In the base game the wild symbol is represented by the Pollen Party logo and it will replace all others in a winning combo except for the scatter and the bonus icons.

This is triggered by landing three or more of the scatter symbols anywhere in view for which you will receive 12 free spins; during this round if you can land the flower symbol on reel three up to three extra wilds will placed on the reels. The flower symbol is also wild so you now have three wilds including the original Pollen Party one.

Trigger this by landing three or more of the baby bee bonus symbol anywhere in view; you will now be taken to a separate screen displaying a honeycomb on which there are various picks. Now just keep picking for cash prizes until you find the ‘Pop’ location which ends the game. Finding an extra life before that will extend the round.

Pollen Party is very much a Microgaming slot but it does offer a bit of variety which can be lacking in some of this company’s recent releases; both features offer prize-winning potential and there’s a nice high RTP of 97.00%.