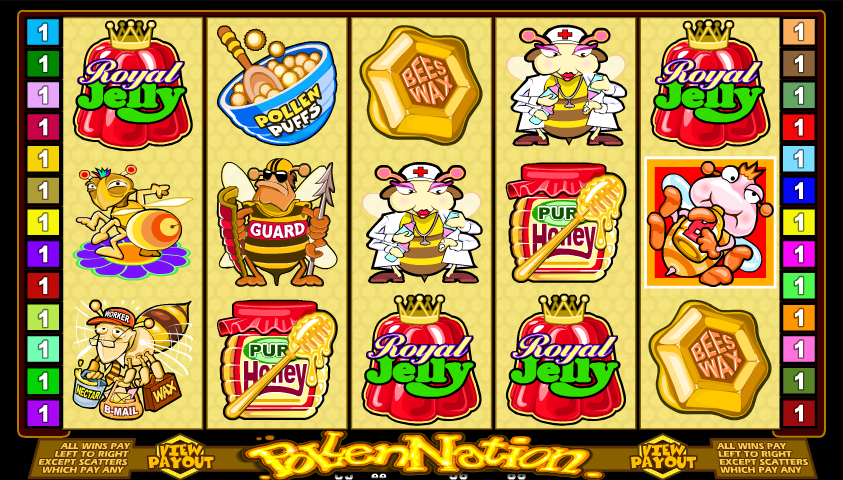 We’ve reviewed plenty of online slots in the past with animals as their theme but this one is something a little different; it’s from Microgaming, it’s Pollen Nation and it is of course all about bees – those very important little creatures that pollinate plants and manufacture honey. If you didn’t think it was possible to base a slot on this insect then read on to find out more.

Pollen Nation is a five reel and twenty five payline game and there’s no background scene because the big, bright reels take up all the available space. There are no boring playing card symbols here because all the icons are theme-related and include Bees Wax, some breakfast cereal, honeycomb, honey, royal jelly, some sort of postman bee, a nurse bee and a security guard bee.

The queen bee is the wild symbol which pays out 6000x your line stake for five on an active payline, the baby bee is the scatter which triggers the feature and then there’s another scatter represented by a be showing his sting.

There’s just the one bonus feature in Pollen Nation and you can trigger it by landing three, four or five of the little baby bees anywhere on the reels.

You will now be taken to a screen displaying a honeycomb structure and your task is to pick the highlighted ones and fill up the baby’s bottle until you find the one that says ‘Stop’. That signifies the end of the game, your prize will be calculated and you will be returned to the base game.

The scatter symbol triggers the feature so there’s no need to play with lots of active paylines if you don’t want to – you’ll still have the same chance of activating the Babee Bonus.

It’s quite good fun and a novel theme but there’s not too much to keep players interested here after you’ve tested out the feature once or twice.