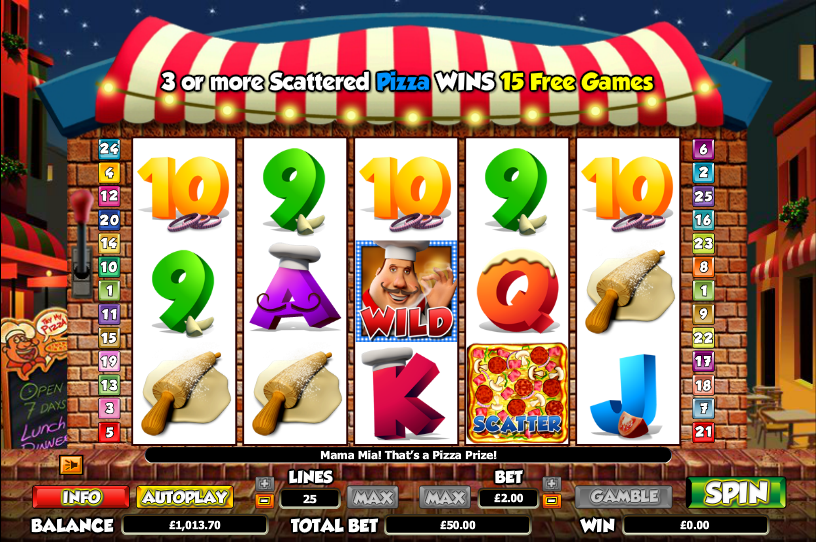 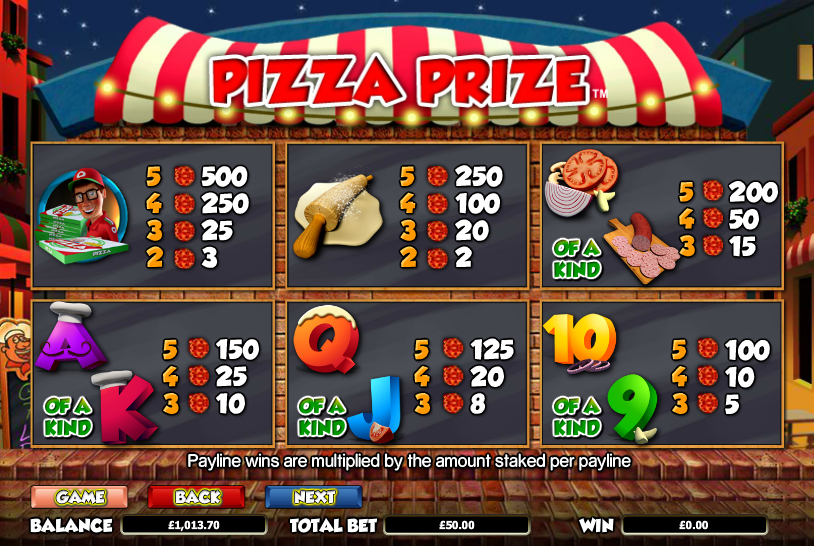 Most people enjoy the occasional pizza whether it’s from a late-night takeaway, frozen from a supermarket or, in the case of this online slot from Nextgen Gaming, from a traditional Italian restaurant. It’s called Pizza Prize and it serenades players with a stereotypically Italian tune as the reels spin. Keep reading to find to more about the free spins with a twist and the gamble feature.

Pizza Prize is a five reel slot with three rows and up to twenty five paylines; those reels are set against the sides of a pizza oven and the backdrop features an evening street scene under a starry sky.

There are four main base game symbol comprising a sliced sausage, chopped vegetables, rolled pizza dough and a pizza delivery boy. 9, 10, J, Q, K and A make up the lower value remainders.

This is Tony’s restaurant and he represents the wild symbol – he’s worth 10000x the line stake for five on an active payline. The scatter symbols is a square pizza which activates the main feature.

Landing three or more of those square pizza scatter symbols anywhere on the reels will trigger this bonus game. You are initially awarded 15 free spins and any wins you land will be doubled.

Additionally a pizza oven will appear above each reel and if a pizza lands on that particular reel you will the following extra prize:

It’s not possible to re-trigger the free spins or to land a win including five scatters.

All wins can be gambled by clicking the ‘Gamble’ button underneath the reels; try and double or quadruple you prize by correctly guessing the colour or suit of the next card drawn.

As we always say, steer clear of the gamble feature, you’ll end up losing in the long run.

The design of Pizza Prize is similar to several other Nextgen slots but the theme is an entertaining one and the music is not too grating. During testing we found it tough to trigger the free spins but perhaps we were just unlucky.