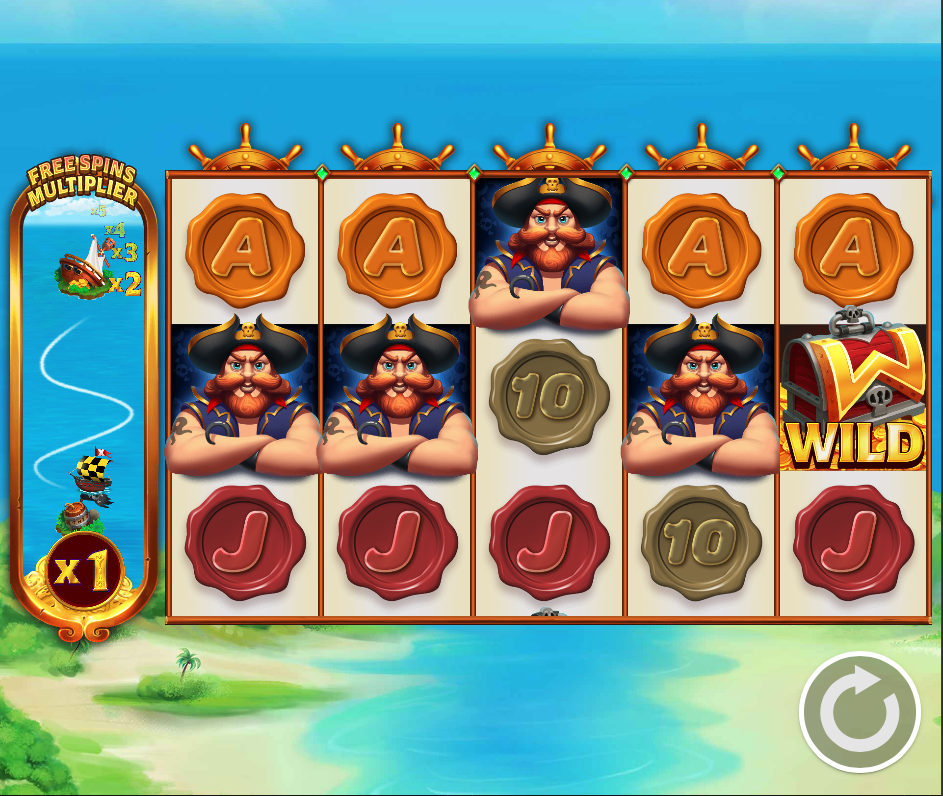 The life of a pirate in the 17th century Caribbean was violent, unpleasant and pretty short but at least they perished in the knowledge that one day they’d make an entertaining theme for an online slot machine; this one’s developed by Gong Gaming and it’s called Pirate’s Quest.

Pirate’s Quest is a five reel slot with three rows and twenty five fixed paylines; the calm, blue Caribbean seas provide the mosquito-ridden backdrop and on the left you can see the multiplier trail which we’ll explain shortly.

The theme-related symbols include the pirate captain, his parrot, the cannon, the pirate’s hat and the battle of rum; 9, 10, J, Q, K and A make up the lower values. The treasure chest is wild and the gold discs are the scatter symbols.

During the base game there’s a selection of colourful pirate ships which can appear on the reels – they don’t pay anything themselves but each one will push the ship along between the islands and gradually increase the win multiplier for the free spins round. There’s a maximum multiplier of 10x available.

Landing at least three of the golden Free Spins scatter symbols anywhere in view will activate this feature and award an initial ten free spins; when the round is underway more spins can be won like this:

Extra spins can be won indefinitely and this feature is also where the accumulated win multipliers come in handy as they’ll be applied to every winning combo during this round. When the round is over the win multiplier will be reset back to 1x again.

We’ve always got time to enjoy a pirate-themed slot machine and Pirate’s Quest is a fast-moving and entertaining example of the genre. The Multiplier Map keeps things interesting in the the base game and links the main feature in nicely.

Yes! Free spins and the multiplier map in the base game.

The Return To Player percentage for Pirate’s Quest is 96.00%.

How To Win On Pirate’s Quest?

Land at least three matching symbols or wilds starting from the left hand side; trigger the free spins.

Where can I play Pirate’s Quest then?