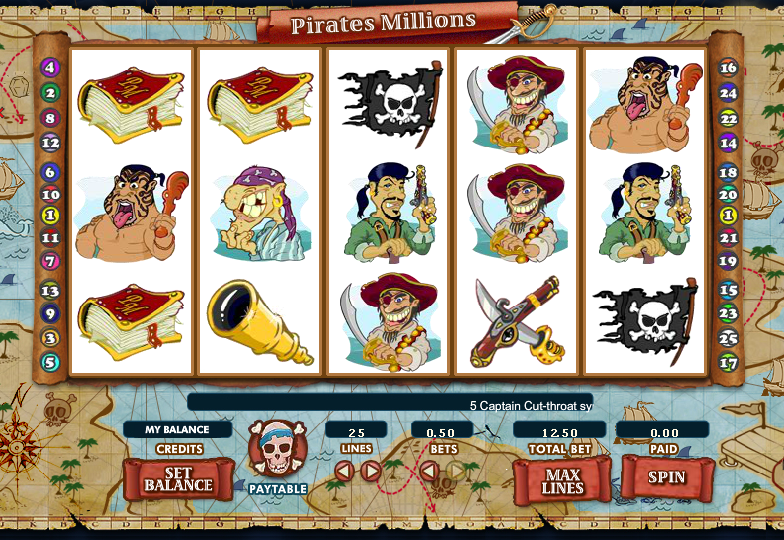 It’s time to take to the ocean waves with Pirates Millions, the exciting new online slot from Random Logic which transports us to the south seas when pirates and privateers criss-crossed the warm waters to ambush merchant ships.  This game is drawn in a humourous comic book style which probably doesn’t do justice to the short, violent lives lived by these outlaws in real life but hey, this is just a game.  We’ll also mention right now that this slot includes a vast possible prize but more of that later.

Pirates Millions is a great-looking game featuring five reels and twenty five paylines and the background to the reels is a map of the tropical area around which are pirates roam; look closely and you’ll see red dotted lines perhaps pointing the way to buried treasure.

The main symbols are a motley collection of bloodthirsty-looking pirates and there’s even a female pirate in the ranks (in reality not completely unknown – Anne Bonny and Mary Read were a couple of the most famous).  The pirate captain is the most valuable and will multiply your line bet by 5000x. Lower value symbols are a compass, telescope, map book, crossed gun/cutlass and a Jolly Roger.

Special symbols include a treasure chest wild,  a parrot bonus symbol and a pirate ship scatter.

We wouldn’t normally wax lyrical about a wild symbol but here the treasure chest is the key to an enormous sum of money.  If you can land five wilds on an active payline your line bet will be multiplied by an amazing 1,111,111.  That’s well worth winning and there’s an maximum win here of £8,888,888, which will certainly brighten your day.

Landing three, four or five of the parrot symbols anywhere on the reels will kick off this feature; four or five is better because  that will apply a 5x or 10x multiplier to the bonus game winnings.

This is an island-hopping game which sees you try to make your way from one to the next; you’ll always make it to the second island but a wrong choice here is game over.  Get to third island and final island for the big prizes.

Just make sure you’re playing with maximum paylines; imagine landing five wilds on a payline which isn’t active – it would be like forgetting to buy a lottery ticket when your numbed come in.

We like this game and perhaps that’s because of the tiny but genuine chance of landing that vast progressive jackpot.  Give it a go!