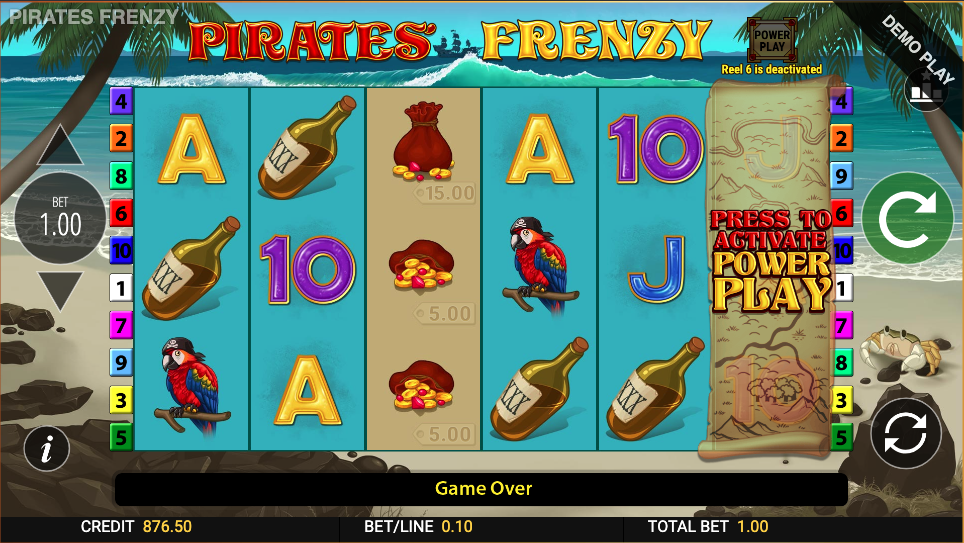 A life on the ocean waves for any self-respecting pirate was pretty short and violent but at least they lie in their hammocks safe in the knowledge that several hundred years in the future they’d be the subject of an online slot machine; this one’s called Pirates Frenzy, it’s developed by Blueprint Gaming and it offers players free spins and an optional sixth reel for bigger wins.

Pirates Frenzy is a five reel slot with three rows and ten fixed paylines; those rather simple-looking reels float in front of a tropical beach on which waves crash onto the shore, washing away any sign of pirate treasure.

The theme-relates symbols include the parrot, the bags of coins, the anchor, the rum and the oranges; 10, J, Q, K and A make up the lower values.

The pirate captain is wild, he only appears in the free spins and he’ll replace all standard symbols to from winning matches; the rear view of the pirate ship is the scatter symbol.

Just click the sixth reel to activate it for a better chance of bigger wins but note that it will double your stake.

Landing three, four, five or six of the ship scatter symbols will award 10, 15, 20 or 50 free spins respectively; the pirate captain appears in this round and as well being a handy wild symbol he will also collect the values from any coin bags which appear on the reels on the same spin.

The graphics in Pirates Frenzy look as if they’ve been borrowed from a much older slot but if you can get past the basic appearance then you may be able to enjoy the extra reel and the gold bags in the free spins round and hey, at least it’s got pirates!