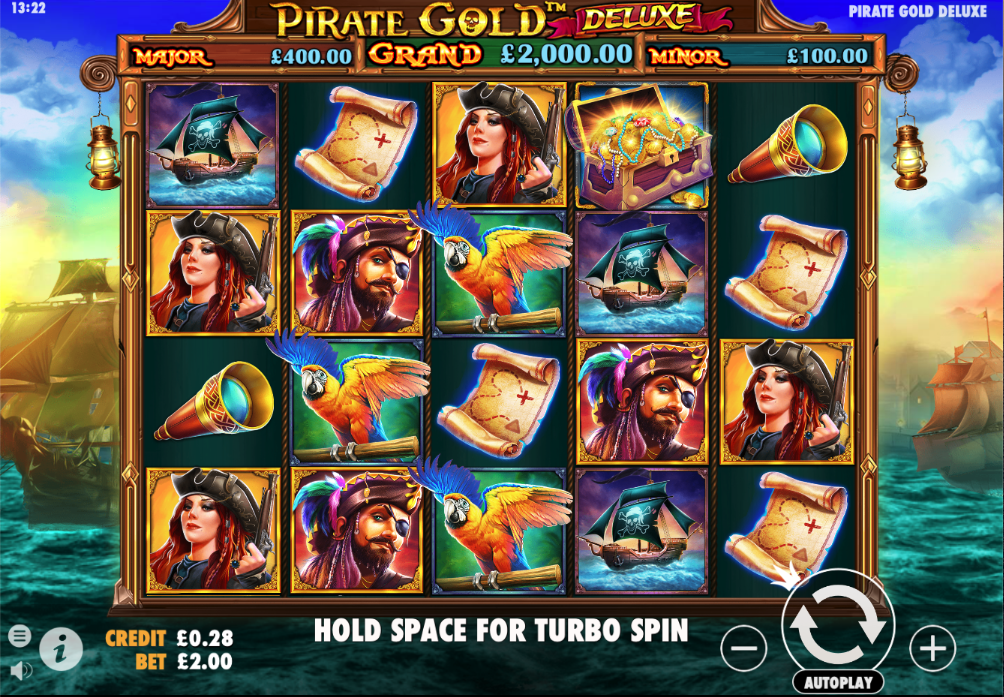 If you’ve previously enjoyed an online slot called Pirate Gold from Pragmatic Play then you’ll be pleased to hear that there’s a brand new version with ‘Deluxe’ appended to the title – collect the money bags to earn some of that pirate loot in the big bonus feature.

Pirate Gold Deluxe is a five reel slot with four rows and forty fixed paylines; pirate vessels bob on the water behind those reels while an early morning mist envelops the buildings visible onshore.

All the symbols are related to the theme and include the two pirates, the parrot, the pirate ship, the treasure map, the telescope, the hooked hand and consign gold, silver and bronze; the treasure chest is wild, it appears on reels two to five and it will replace all standard symbols. The money bag is the bonus symbol.

Every yellow money bag appears with a value or one of the jackpots overlaid and landing at least eight of these bags will trigger this feature; the reel set will now only display the money bags (which lock in place), multipliers (awarding up to 5x the total round), retrigger symbol and blanks. You’ll get three respins to land more money bags and each time they do the spins reset to three again with the new bags locked in place.

A retrigger treasure chest landing will start the round again with the same triggering bags in place.

Pirate Gold Deluxe is pretty similar to its predecessor except that there are no free spins in this version so ‘Deluxe’ seems to mean that there’s fewer bonus features; still it’s got pirates, the money bag feature and a high RTP of 96.48% so what’s not to like?