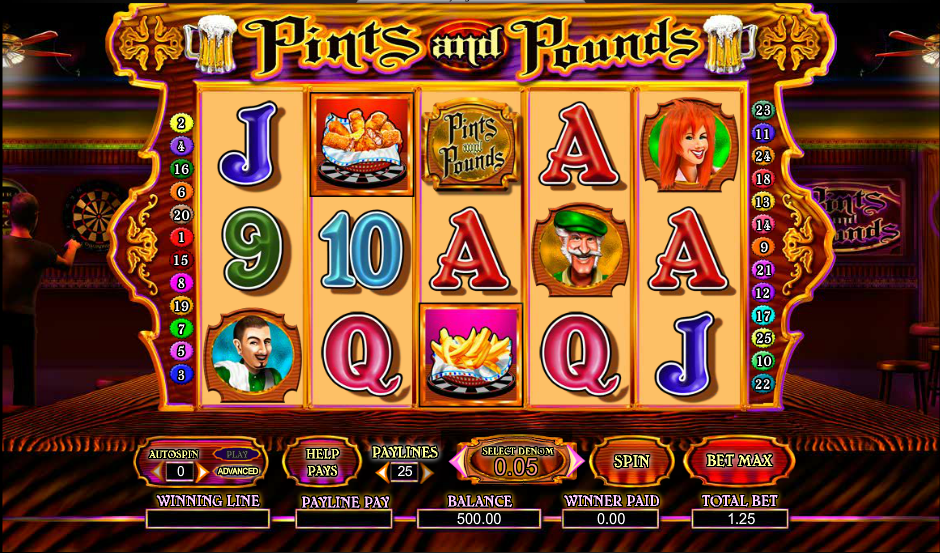 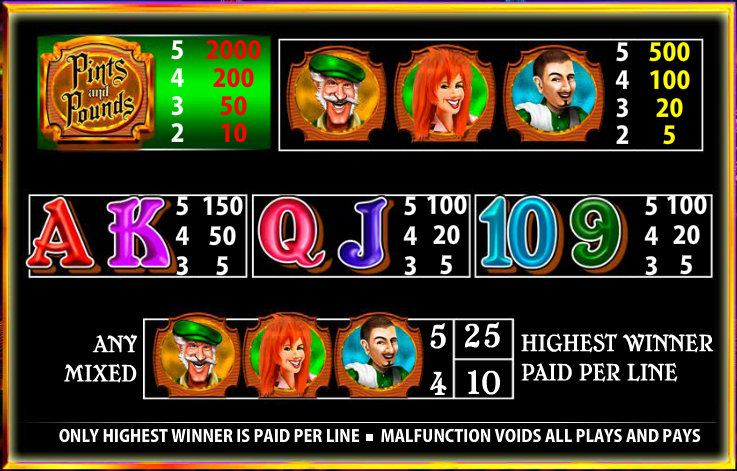 Very few people should turn down a trip to a good old English boozer but if it’s raining outside you may want to turn to an online slot such as Pints And Pounds which combines a pub visit with the spinning reels. The highlight of this game is probably the enhanced free spins round and you can read all about it below.

Pints And Pounds is a five reel slot with three rows and up to twenty five paylines; those reels spin on a traditional pub sign but in the background we have the pub itself – all dark wood, sticky carpets and a bloke playing darts.

The four high value symbols include the Pints And Pounds logo and three characters who look like the landlord and two bar staff; 9, 10, J, Q, K and A make up the lower values. There’s also a reduced payout for landing at least three mixed characters on a payline.

The wild symbol is a big gold ‘wild’ which appears only on reels three, four and five; it can also appear stacked, covering the entire reel for extra money-making opportunities. There are three bonus symbols – fish, chips and beer – which appear on reels two, three and four respectively.

This is triggered by landing the fish, chips and beer bonus symbols anywhere on reels two, three and four respectively. This kicks off the Pub Grub Bonus Reels in which you will initially receive six free spins.

Your task here is to collect meal items and once you have a complete meal you will receive a prize multiplier for the triggering spin in the base game. Completing two or three meals in one spin will award 2x or 3x the normal payout respectively.

Pints And Pounds is a little bit basic but it’s worth a few spin based on it’s theme alone; the feature is a little tricky to trigger but can be lucrative when you do manage it. There’s an RTP of 94.01%.