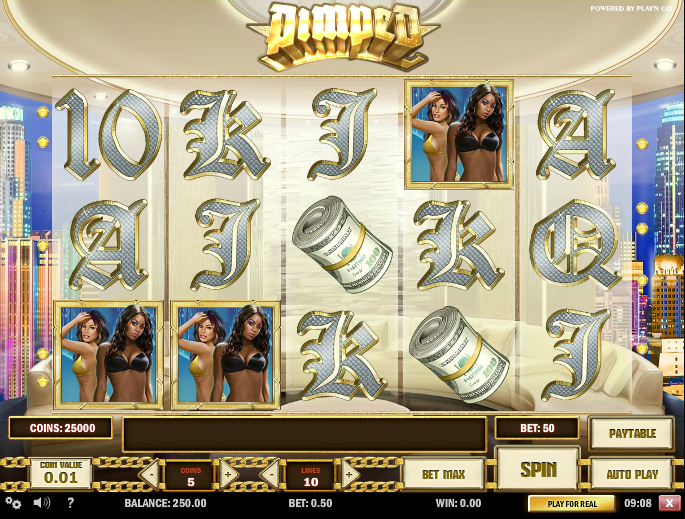 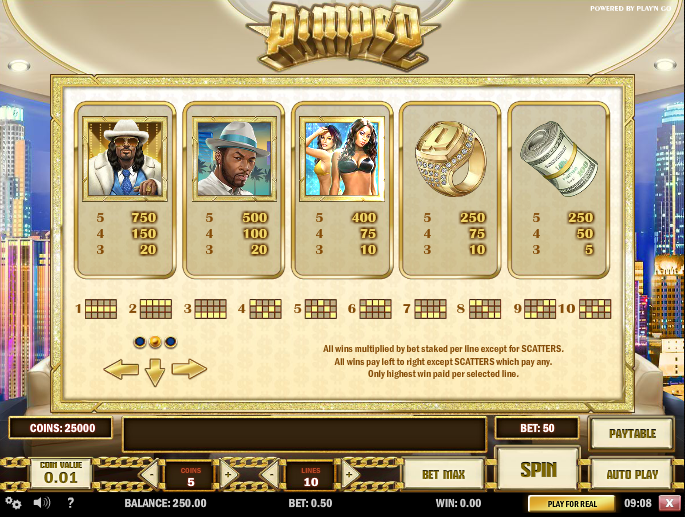 In the month which saw the release of the HD version of Loaded, Play N Go has added to this genre with Pimped, an online slot which could be described as the younger, blingier version of this Microgaming classic. Essentially of course it’s newer so it’s of a higher quality but the money, the girls and the ostentatious jewellery remain the same.

Pimped is a five reel slot with three rows and up to ten paylines; the characters in this story occupy some sort of penthouse apartment with skyline views of a city at night. Like Loaded it creates an atmosphere of wealth and bad taste.

There are five high value symbols including a roll of cash, a ridiculously expensive but hideous gold watch, a couple of scantily clad girls and two gentlemen from this tale, one of whom is a ringer for Huggy Bear. Gleaming, metallic 10, J, Q, K and A make up the lower values.

The wild symbol is represented by the letters ‘Wild’ formed into one of those rings which covers all one’s fingers; it can appear stacked on all reels. A glittering blue and gold dollar sign is the scatter symbol which activates the main feature.

Pimped includes just one bonus feature and it’s triggered by landing three or more of the dollar scatter symbols anywhere in view. You will now receive just five free spins but each one guarantees a win.

Each time you land another scatter symbol during this feature you will be awarded two extra spins up to a maximum of twenty. There’s no extra multipliers for the wins you land here.

After each win you can choose to click the ‘Gamble’ button under the reels; here you can try and double or quadruple that win by guessing the colour or suit of the next card drawn. Five correct guesses or 2500 coins is the win limit.

We would always advise to avoid the gamble feature; it increases the risk of losing to a dangerous level. Use it if you must but be careful.

Our favourite part of this game is the laid back Hip Hop soundtrack but there’s nothing wrong with the gameplay either; it’s high quality, there’s some free spins chucked in and a decent RTP of 96.51.