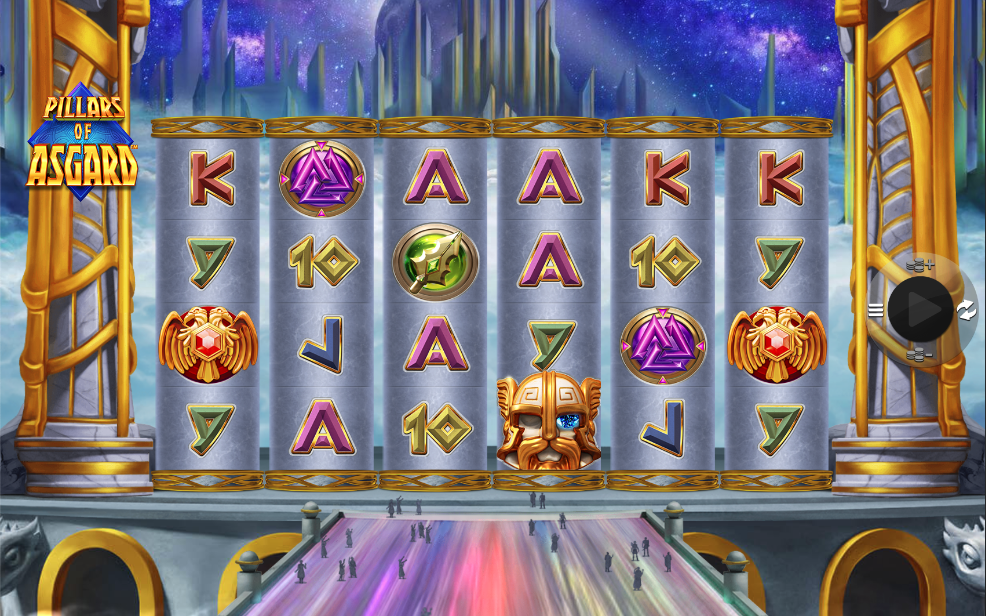 Join us now as we head to the mythical home of Odin and the Norse gods in this online slot from NextGen Gaming; it’s called Pillars of Asgard and it promises players an exciting free spins round and an opportunity to buy straight into the feature.

Pillars of Asgard is a six reel slot with four rows and 4096 ways to win in the base game; the reels spin above the famous Bifrost bridge (possibly more familiar now to those who have seen Marvel’s Thor movies) with the golden pillars on either side.

The high value symbols include various colourful shapes and symbols while the lower values are the standard 9, 10, J, Q, K and A.

Odin’s helmet is wild and it will replace all standard symbols to help create winning matches – each wild in a combos will increase its win multiplier by 1x up to a maximum of 10x. The golden crown is the scatter symbol.

This is triggered by landing at least three of the golden crown scatter symbols anywhere in view for which you’ll receive twenty free spins plus the following:

During this round each extra scatter symbol landing will increase the size of its reel by one position, adding more paylines to the mix; when a reel reaches the maximum height of ten Odin’s Blessing is triggered and five more spins are awarded with all scatters in view replaced by wilds.

If all reels reach ten positions the Rise of Odin is triggered with a massive one million paylines and one completely wild reel for the remaining spins.

Click the Buy Pass button on the left hand side of the reels and for 80x the stake you’ll gain entry into the bonus feature.

Pillars of Asgard is one of the more creative slots in this genre with an amazing million potential ways to win if you can work your way through the different parts of the main feature; the Buy Pass option may sound expensive but the luckier players will find that it works for them.