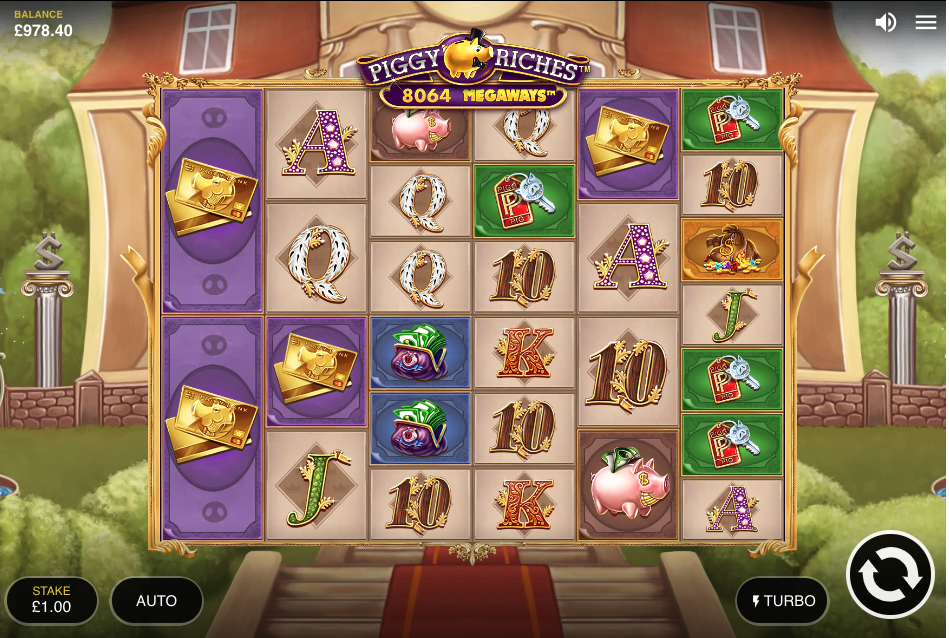 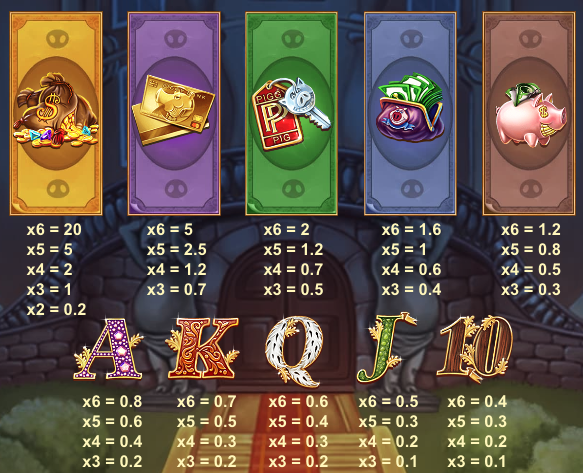 The original Piggy Riches online slot combined the themes of animals and luxury to create a game we enjoyed back in 2013 – it’s now been given the Megaways makeover to spice it up a bit and it’s called Piggy Riches Megaways. This game offers players collapsing reels, huge wild symbols, free spins and more than one hundred thousand paylines.

Piggy Riches Megaways is a six reel slot with up to seven rows on each reel meaning a potential 117,649 ways to win when there are seven rows on all reels; the gold frame which contains those reels floats in front of a large stately home squatting in its own gardens.

The higher value symbols include bags of gems and coins, gold credit cards, a silver key, a purse full of banknotes and a piggy bank; 10, J, Q, K and A make up the lower values.

The wild symbol is stacked seven positions high and it will replace all standard symbols to help form winning matches – up to three can appear on the reels at once and they may also display multiplier values up to 7x. The female pig is the scatter which activates the main feature.

Any symbols involved in winning combinations will disappear to be replaced by more falling in from above – more combos can then be formed and this process continues until there are no more wins.

Landing at least three of the female pig scatter symbols anywhere in view will award a spin of the wheel which will decide the number of spins (up to 22) and the initial multiplier (up to 10x). Every win during this round will increase that multiplier by 1x and each scatter symbol landing is worth one extra spin.

We would say that all slots which have integrated the Megaways payline structure have benefitted from that addition and Piggy Riches Megaways is no exception; it retains the enjoyable gameplay experience of the original and adds to it to create something extremely playable.