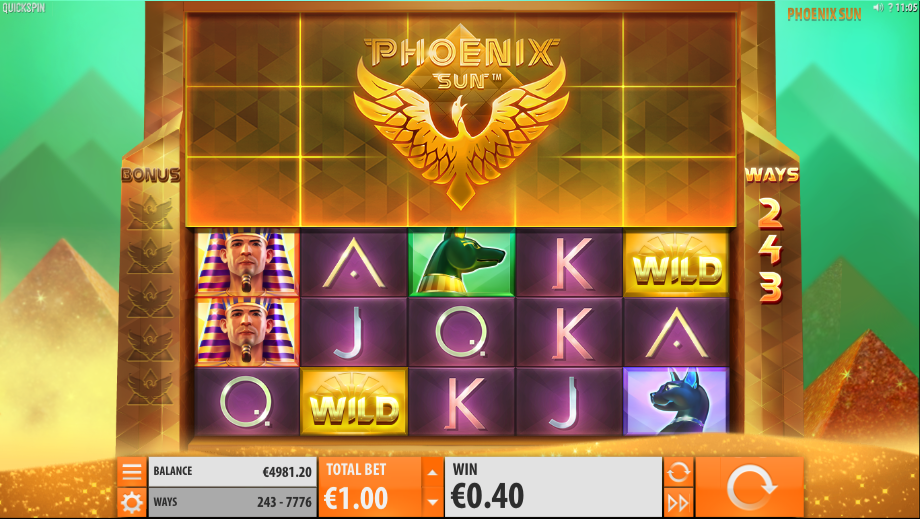 In Greek and Egyptian mythology the Phoenix was a bird which periodically regenerated from the ashes of it’s ancestor; it seems like an ideal theme for an online slot machine and fortunately that’s what we’ve got here. Phoenix Sun is an inventive game from the studios of Quickspin Gaming and you can read all about it here.

Phoenix Sun is a five reel slot with three rows and a potential 7776 paylines when the feature is triggered; the number of paylines in the base game is 243. The reels spin on the bottom half of large golden structure and in the background there are sparkling gold pyramids stretching away into the hazy distance.

The high value symbols are male and female Egyptian characters and then representations of three Egyptian gods; 10, J, Q, K and A make up the lower values.

There are two wild symbols, the basic gold wild which substitutes for all others except the Phoenix wild – that’s also the key to the main features.

This is a very creative feature which is triggered each time one of the Phoenix Wild symbols appears on the reels in a winning line; each Phoenix Wild will remove three of the blocks above the reels to reveal more symbol positions and you’ll get one free spin. This process can continue until no more Phoenix Wilds appear in winning combos.

Each Phoenix Wild collected will be marked on the meter to the left of the reels.

This is triggered by collecting five Phoenix Wild symbols in a single game round and you will receive eight free spins. Those spin take place on a set of reels with full number of 7776 paylines.

Phoenix Sun is definitely a slot to check out, it’s designed to a very high quality and it includes some very creative bonus features; it comes with an RTP of 96.08%.