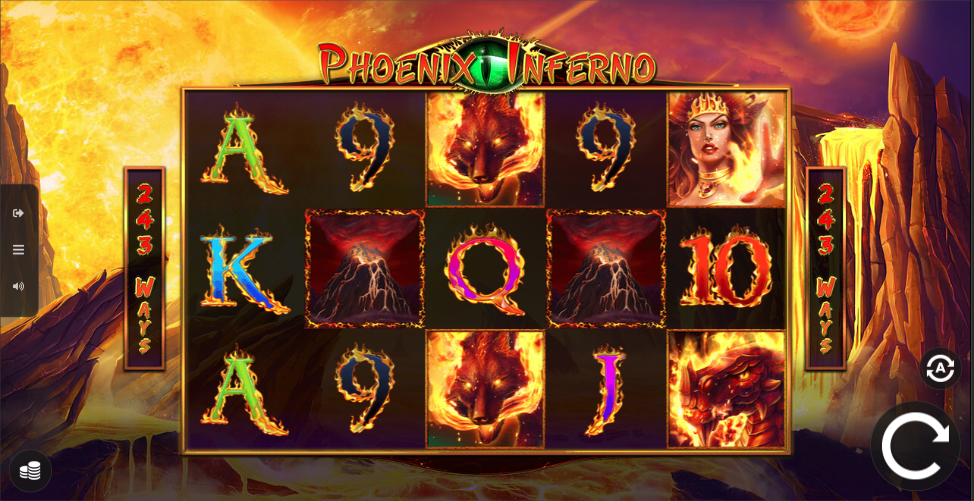 The legendary Phoenix is the creature which regenerates itself from the ashes of its predecessor and it’s has inspired the theme for this online slot from 1×2 gaming; it’s called Phoenix Inferno and from £0.20 per spin it comes with plenty of free spins and extra wild symbols.

Phoenix Inferno is a five reel slot with three rows and 243 ways to win; fire and rock set the scene for those reels which are heated by the molten lava pouring across the surface of this landscape.

High value symbols include the fiery girl, dragon, lion and tiger along with the volcano; 9, 10, J, Q, K and A represent the lower values. The Phoenix is wild and the multicoloured crystals are the scatter symbols.

Landing at least three of the crystal scatter symbols anywhere in view will award the following:

If you’ll excuse the pun Phoenix Inferno doesn’t really set the gaming world on fire but it’s got enough to keep things interesting for a few spins; the action is all centred on the free spins and of course that’s also where the big wins are.

Phoenix Inferno is a fantasy-themed video slot from Iron Dog Studios with five reels, three rows and 243 ways to win.

The Return To Player percentage for Phoenix Inferno is 95.00%.

How To Win On Phoenix Inferno?

Land three or more matching symbols or wilds starting from the left hand side. Trigger the feature.

Where can I play Phoenix Inferno?