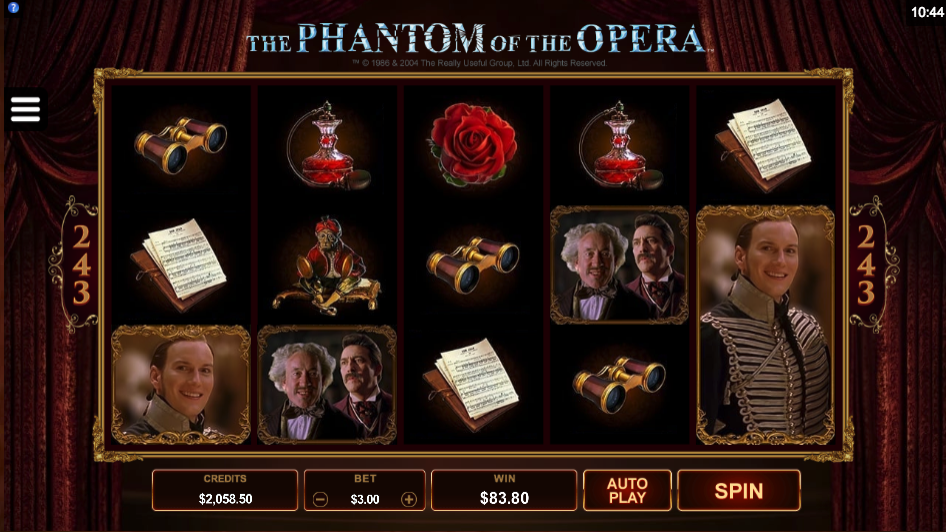 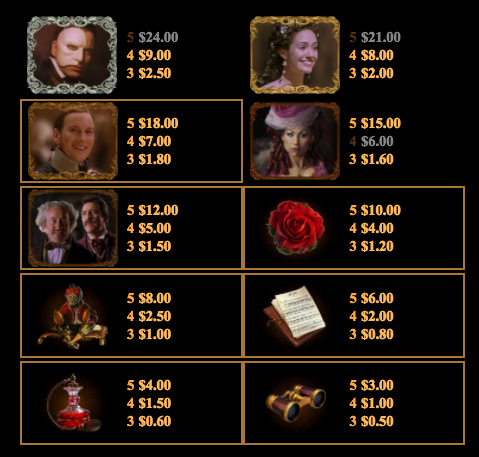 Currently playing at a Microgaming casino near you is this online slot machine based on the famous 1909 novel from Gaston Leroux, The Phantom of the Opera. It tells the tale of the mysterious masked man who prowls the corridors of the Palais Garnier and it comes with two themed bonus features.

The Phantom of the Opera is a five reel slot with four rows and forty fixed paylines and, as you can see from the screenshot above, some amazing graphics and animations which feature genuine performers from a particular theatrical occasion.

The symbols are all related to the theme and include various characters from the production including the masked man himself and Christine, the object of his affection along with a red rose, some sheet music, a bottle of perfume and some theatre binoculars.

The game’s logo is wild and it will replace all others to help form winning combinations except for the mask scatter and the envelope icons. The wild can also appear stacked in the base game.

This is triggered by landing the sealed envelope on reel five in the base game and you will receive a cash prize of up to 20x your total stake.

This occurs randomly in the base game and you will notice the chandelier crash onto the screen, turning up to three reels completely wild in the process.

This is triggered by landing three of more of the mask scatter symbols anywhere in view and you will now get to pick from one of three features:

The Phantom of the Opera is certainly a good looking slot with a particular attraction for those who are fans of this musical because of the characters and the inclusion of the original music. It has an entertaining variety of bonus features and an RTP of 96.40%.