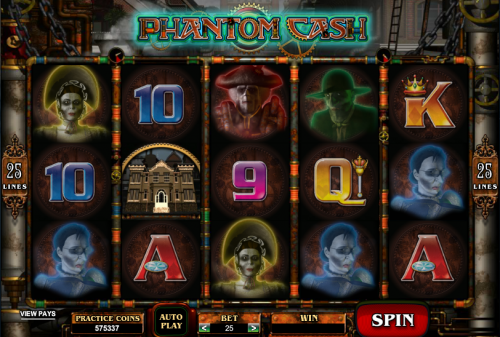 Everybody enjoys a ghost story and when you place those tales in Victorian Britain it always adds an extra edge to the narrative.  Phantom Cash is a brand new online slot from Microgaming which  satisfies both those criteria and gives us a great game into the bargain.  It features an innovative bonus game and a ghostly soundtrack as well as top class graphics.

Let’s get down to nitty gritty though and Phantom Cash features five reels and twenty five fixed paylines;  The reels spin on some sort of pipework frame and in the background we can see an industrial Victorian scene of smoke and factories.

It’s the ghostly symbols which show off the graphical capabilities of this game and we’ll describe them in terms of their colour so we have a green phantom, a yellow spirit, a red apparition and a blue ghost. Wild symbols are the ghost catchers named Thurmingham and Carstairs and the scatter is the haunted house in question.

9, 10, J, Q, K and A are the lower value symbols which take up the rest of the positions on the reels.

These intrepid ghost hunters are handy wild symbols but they only appear on reels one and five; if they take part in a winning combination your win will be multiplied by 2.

This is the really cool bonus feature of this slot and to trigger it you’ll need to land three of the haunted house scatter symbols anywhere on the reels.

You will now see at the top of the screen the Ghost Meter which always starts at eight and your job is to capture them all.  Our ghost hunters, Thurmingham and Carstairs, are the men for the job and and if any of the ghosts land on the same row as one of them during a spin, that’s those ghosts captured with a 2x multiplier.

If both chaps land on the same row as a ghost, there’s a 4x multiplier for that occurrence.

You can also re-trigger this bonus round by landing three more scatter symbols – the Ghost meter will increase by eight.  The game ends when all ghosts have been captured.

The sound effects and the animations add up to a top quality game from a company which is starting to up it’s game and this is a slot we’ll return to regularly; we recommend you do too.