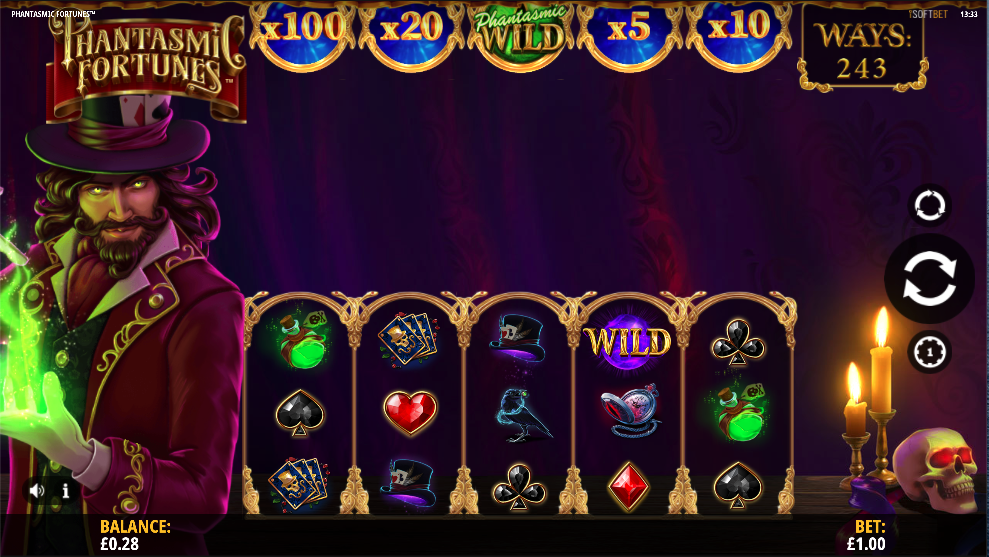 The ability to create green fire from one’s hands is probably a useful skill and that’s what we’re dealing with in Phantasmic Fortunes, this online slot from iSoftBet which revels in the dark arts; from £0.20 per spin players can also look forward to expanding reels, prize-giving orbs and free spins.

Phantasmic Fortunes is a five reel slot with an initial three rows and 243 ways to win; our spooky chap stands to the left of the reels, hand aglow with green fire while the gap above those reels will be explained shortly.

The magical high value symbols include the top hat, the playing cards, the green potion, the stopwatch and the raven; playing card symbols in red and black make up the lower values. The gold and purple ‘Wild’ is wild, it appears on reels two to five and it will replace everything except for the Bonus symbol.

Also known as Xpanding Ways in this game, any diamonds which land on a reel will increase its height by one position for the next spin, increasing the number of paylines in use up to a maximum of 7776; this expanding continues until one of the reels reaches one of the orbs at the top of the screen where there are a range of possible prizes waiting:

A maximum of two reels can reach the orbs at any one time and when the prizes have been awarded the reels reset back to three rows and 243 ways to win.

When the reels have been reset to their starting position there’s a chance that the Magic Boost will happen and increase the size of up to two reels instantly.

Landing three of the gold Bonus symbols anywhere on reels two, three and four will trigger this round; diamonds land in the usual way and expand the reels during this feature but if they reach the top and claim a prize only that reel will reset to three rows. The spins continue until one of the reels uncovers the ‘Collect’ in an orb, rather than a prize.

In our experience iSoftBet generally come up with something clever and innovative and Phantasmic Fortunes is no exception; we’ve seen expanding reels before but not like this and not with prizes just waiting at the end of the vertical journey – don’t miss this slot, it’s top notch!