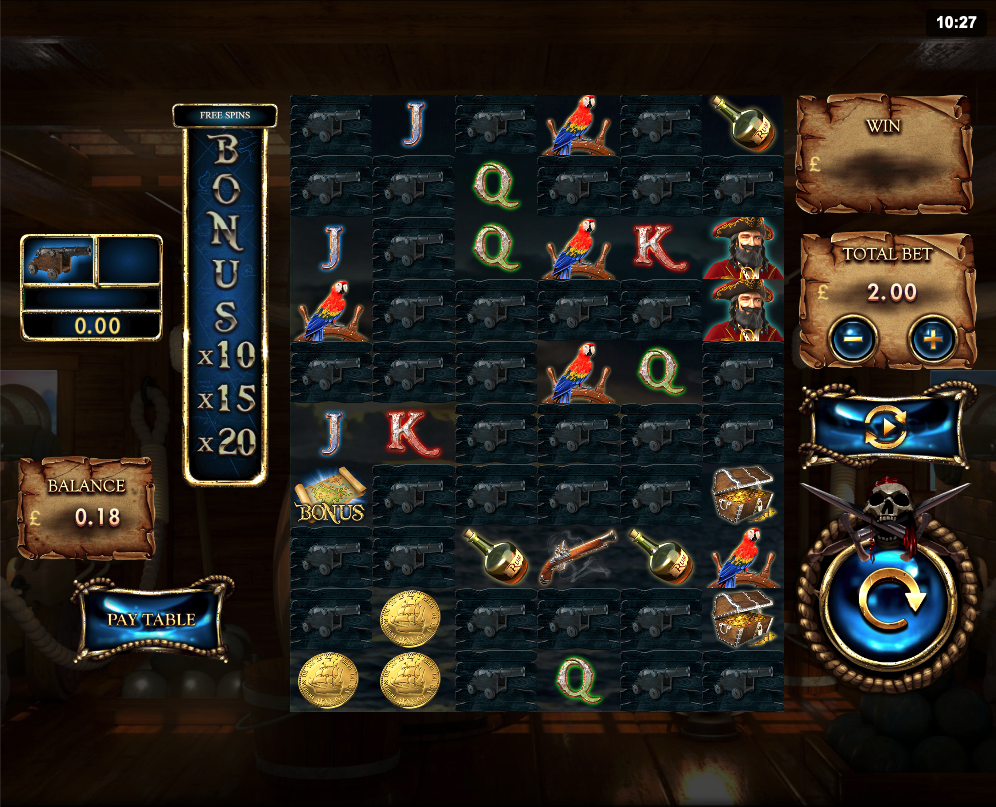 Piracy may be our favourite theme for an online slot machine so we’re delighted to introduce one more to the genre; this is Parrot Bay, it’s developed by Red Rake Gaming and from £0.20 per spin it tempts us shipmates with cascading reels, free spins, the cannon bonus game and a vast number of paylines.

Parrot Bay is a five reel slot with ten rows and one million ways to win; those reels spin inside the pirate ship and we appear to be on the deck where the cannons look out through their various holes.

Pirate-themed symbols include the ship’s captain, the treasure chest, the gold coin, the parrot, the pistol and the bottle of rum; J, Q, K and A represent the lower values. The golden skull and crossbones is wild and the treasure map is the bonus symbol.

Every symbol in a winning combination will disappear and be replaced by more falling in from above – more combos can then be formed to continue the process.

Each non-winning spin will increment the cannon meter to the left of the reels by a small amount and when it’s full this feature will be triggered; you’ll now get to play a picking round in which you get six shots to try and uncover matching symbols to win multipliers of your stake or some extra shots.

Each successful cascade or bonus symbol landing on a particular spin will light up one of the ‘BONUS’ letters to the left of the reels; when all five letters are lit the free spins feature is activated. If the cascades continue then the special symbol will have its multiplier increased from 5x to 10x, 15x and finally 20x with each extra lit position.

You’ll now receive ten free spins and the special symbol will be selected at random – any wins including this symbol will be multiplied by the amount shown above. Five more spins can be triggered in the same way and if this happens another special multiplier symbol will be chosen.

Parrot Bay plays alongside the same lines as Million Dracula and Million 777 from the same developer but we’ve enjoyed both those slots and this one is just as entertaining. Play for long enough and you’ll to get to play the Cannon Minigame but the bigger wins are in the free spins round.