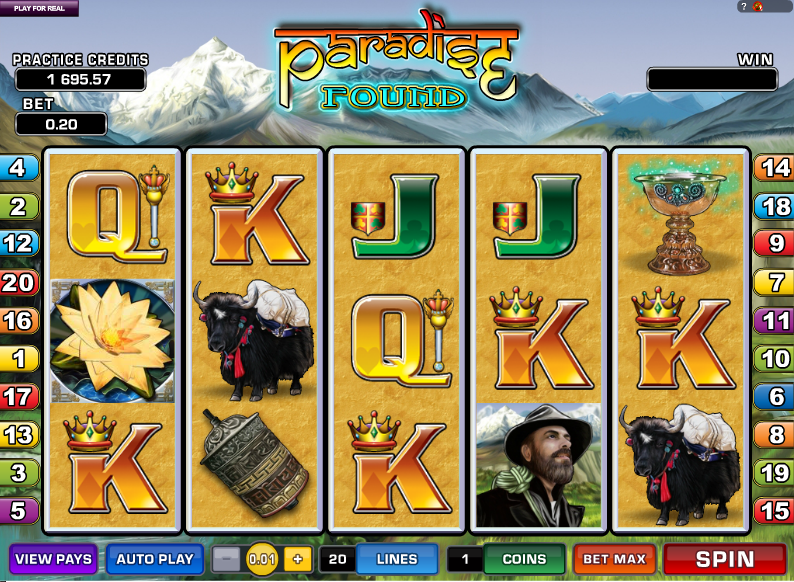 Paradise Found is one of the most interesting online slots we’ve played for a while in terms of it’s theme; it’s based around Tibet and the journey to get this country on the roof of the world.  The race to reach this legendary location in the 19th century is the subject of Peter Hopkirk’s fascinating book ‘Trespassers On The Roof Of The World’ which should be read by anyone with an interest in this region.

This is a five reel and twenty payline slot and those reels are set against a Himalayan backdrop and perhaps the snow-capped Mount Everest in the distance. The main symbols begin with our intrepid adventurer, then there’s an ornate gold cup, a prayer wheel and finally a laden-down buffalo.  Minor symbols are 10, J, Q, and K.

One of the bonus symbols is the legendary Potala Palace in Lhasa, the capital of Tibet and the other is the beautiful yellow lotus flower which is wild and also helps trigger the bonus feature. The intrepid traveller is also the scatter worth up to 100x your line bet.

There’s just the one bonus game here and it’s triggered by landing the lotus flower wild on reel one and the Potala Palace on reel five.  It’s an interesting game the like of which we’ve not seen before and what happens is all the reels are held in place and one single random position on reels one, two or three will turn wild and award a prize.

You will receive ten lotus flowers at the beginning of the round and so the above will occur ten times, hopefully making you some money in the process.

Paradise Found is suitable for low rollers because you don’t need to play maximum paylines to trigger the features; you just need the correct symbols anywhere on reels one and five. Payouts will be proportionately less though.

This is a reasonably basic slot which is improved by a creative bonus feature and the unusual theme which, as you can probably tell, we find particularly interesting.  Oriental music adds a little extra to what is a decent game.