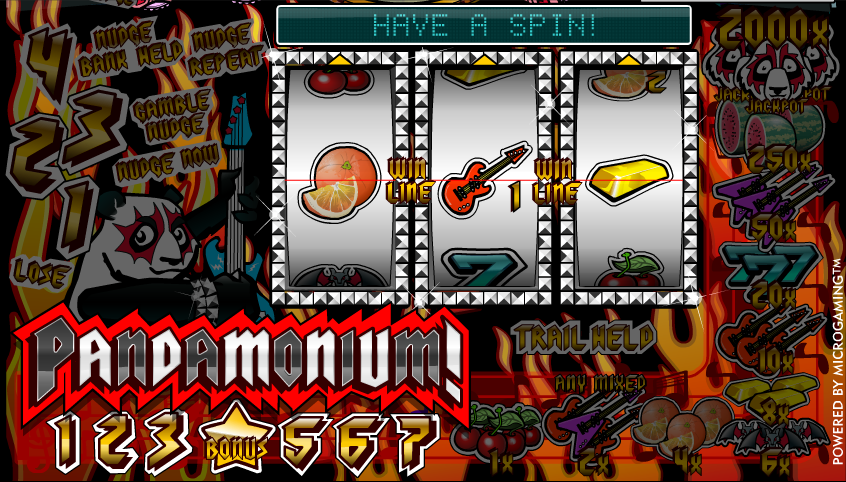 Pandas and rock music clearly go together in a very natural way and the success of this combination is clearly demonstrated in Pandamonium, a noisy online slot machine from Microgaming. Not only does it have a brilliant theme, it’s also a fruit machine-style slot with the sort of features which should appeal to UK players.

Pandamonium is a three reel and single payline slot which brings to mind the cover of some of a heavy metal album from the 1970s; gothic script and flames pepper the background and the heavily made-up panda sits to the left of the reels with his guitar in hand.

The symbols are a combination of traditional fruit and theme-related icons such as guitars, bats and the panda himself.

You will notice the number trail underneath the Pandamonium logo and the way to light it up is to collect the numbers which appear on certain symbols on the payline. You must reach the cherries to the right of the trail at least to trigger the feature – the further you progress, the higher value prizes you will start the feature with.

The number four in the trail is a bonus spot and landing here will offer you rewards including a boost or a random stop along the trail.

The second way to reach the feature is to make a winning combo; there are no cash prizes for this, just entry into the game.

When you reach the feature, which you can see in the video below, all you have to do is spin the counter to move around the board. Each segment you land on will increase the cashpot, the number of nudges or the value of the feature.

Landing on a question mark may well end this round so don’t wait too long before collecting. When you do collect, make sure you collect the the correct prize as they cycle through in turn.

Nudges are randomly awarded and let the player jog certain reels down to collect numbers or to make winning combos. They may also be gambled, banked or repeated if you’re lucky.

Holds can be used to freeze reels for the same purposes and they also randomly awarded.

The nudges and holds should be used strategically here to either make winning combos or to collect numbers and fill the trail.

The bonus number on the trail can often be more useful than moving further on so if you have ‘2’ on the reels and get the chance to hold, hold all reels to make a total of four on the next spin and trigger that bonus.

A great game – the feature is pretty easy to trigger and prizes seem much easier to win than similar slots such as Abra-Kebab-Ra (although of course they are not). UK players – use your imagination and you could be back in the corner of the pub.