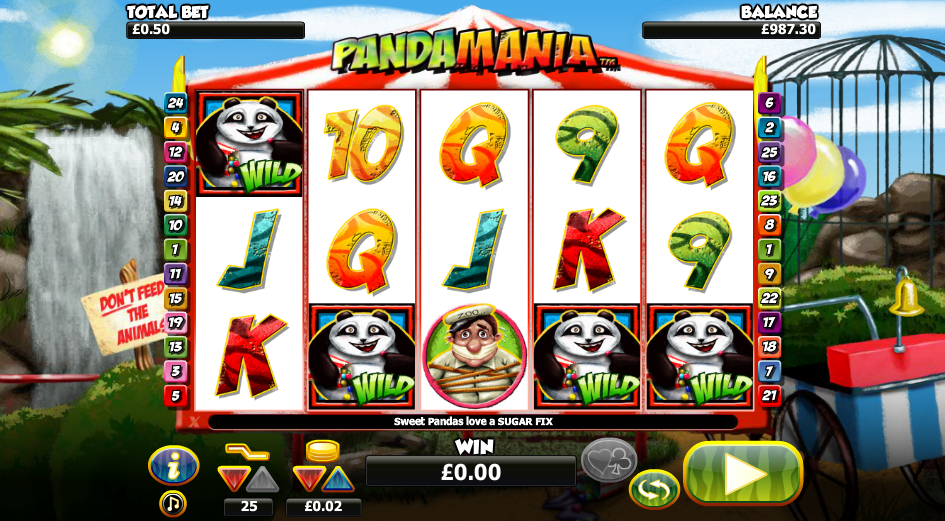 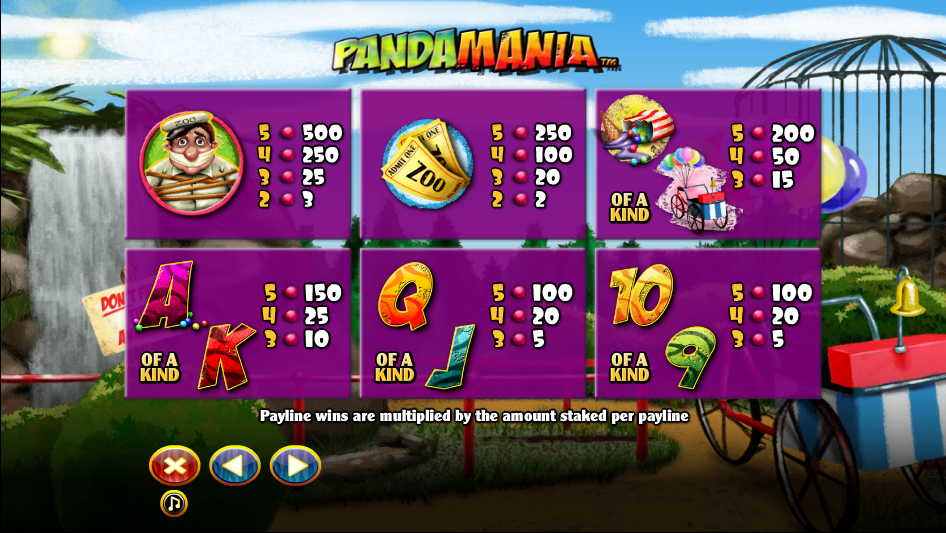 It’s time to take a trip to the zoo as we check out Pandamania, an animal-themed online slot from Nextgen Gaming. This is no ordinary zoo though – the zookeeper is tied up and the panda is marauding around the zoo on a pedal powered cart. Read on ti find out more about this game including several bonus features and the chance to gamble your wins.

Pandamania is a five reel slot with three rows and twenty five paylines and those reels are set in front of a zoo-like landscape complete with cages, a waterfall and of course a sign that reads ‘Don’t Feed The Animals!’.

The four higher-value symbols are the pedal-powered cart. a bag of sweets, some zoo tickets and the tied-up zookeeper. 9, 10, J, Q, K and A are the six lower values.

The panda is the wild symbol, the scatter is the PandaMania sign and there’s also a padlock bonus icon.

The padlock symbols appears only on reels two, three and four but if you can land three anywhere in view you will get to pick one of those icons. This will award one of the following:

This occurs randomly in the base game and the panda will cycle across the screen, adding one or more wilds to the reels which will then be reevaluated for wins.

Landing three or more of the Pandamania signs anywhere on the reels will award ten free spins. Any wins will be subject to a 2x multiplier and it’s possible to re-trigger the spins by landing three+ more scatters.

Additionally the Escaped Panda bonus occurs more often and the Pick Me Bonus is also active.

Any win can be gambled by clicking the hearts/clubs button below the reels. You now have the chance to double or quadruple your win by correctly guessing the colour or suit of the next card drawn.

As we always say – steer clear of the gamble feature; it might be tempting but it’s the quick way to run down your bankroll.

Anyone familiar with Nextgen slots will recognise the format here but it’s good fun nonetheless; the bonus features seem to trigger regularly, especially the Escaped Panda and the sound effects are quite entertaining.