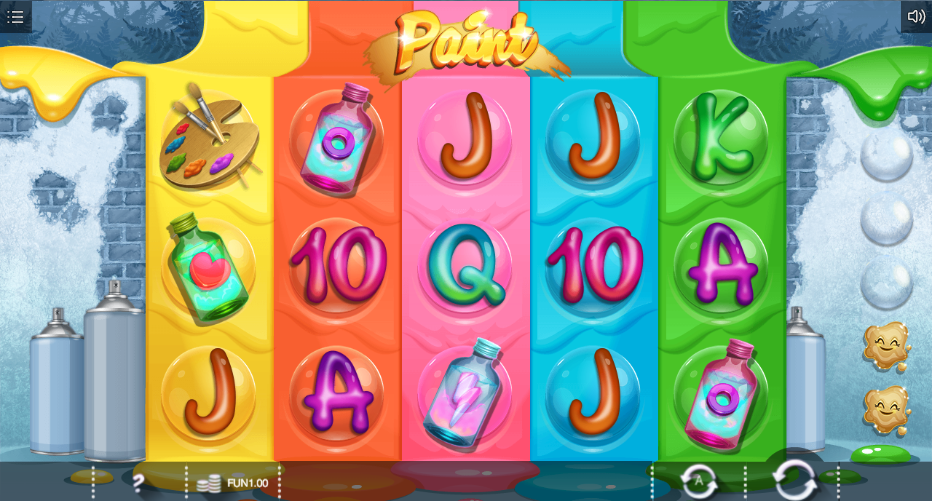 If you’d like to bring a little colour into your life while also spinning the reels then why not check out this cheerful online slot from Iron Dog Studios; it’s called simply Paint and it’s multicolour reels offer the promise of bonus features galore so keep reading to find out more.

Paint is a five reel slot with three rows and twenty fixed paylines; the reels are yellow, red, pink, blue and green and they are painted on a brick wall. Rather than spinning to a stop, the symbols appear in bubbles of paint to complete the picture.

The four high value symbols are an easel and then red, green and blue bottles containing a purple ring, a heart and a lightning strike respectively; 10, J, Q, K and A make up the lower values.

The wild is a multicolour circle which will replace all others to help form winning combos except for the pink paint splash and the bonus icons.

This is triggered by landing at least three balloon bonus symbols in adjacent rows starting from the left hand side; more triggering symbols will mean a bigger multiplier of any wins from this feature.

All you have to do is pop the balloons shown to reveal multiplier values until you find the word ‘End’.

Collecting five gold paint splashes on reel three will trigger this feature and they’ll be stored in the bubbles on the right hand side as you progress.

You’ll receive an initial five free spins but any further gold splashes on reel three will ward an extra spin. There are four extra coloured paint splashes on the reels during this round with the following rewards:

When the round is over any winnings are multiplier by the total, collected multiplier.

Paint is quite an unusual slot but not an unenjoyable one with it’s quirky gameplay and unusual bonus features; we particularly like the free spins which are pretty much guaranteed to hit as long as you play for long enough. Paint comes with an RTP of 95.80%.