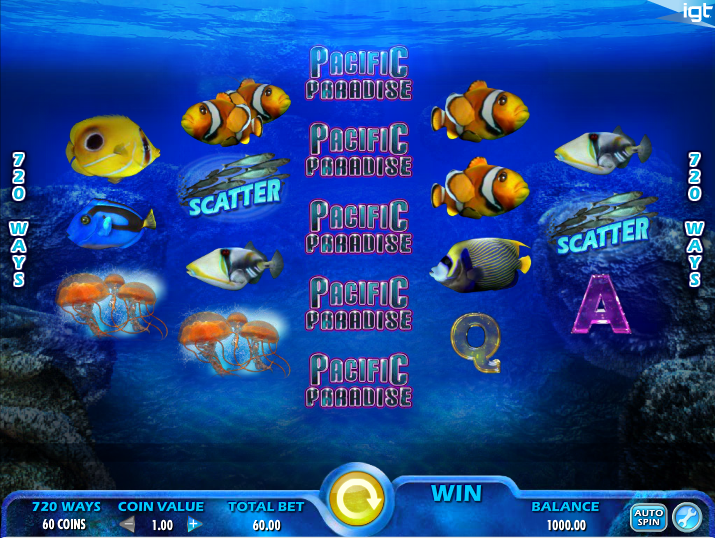 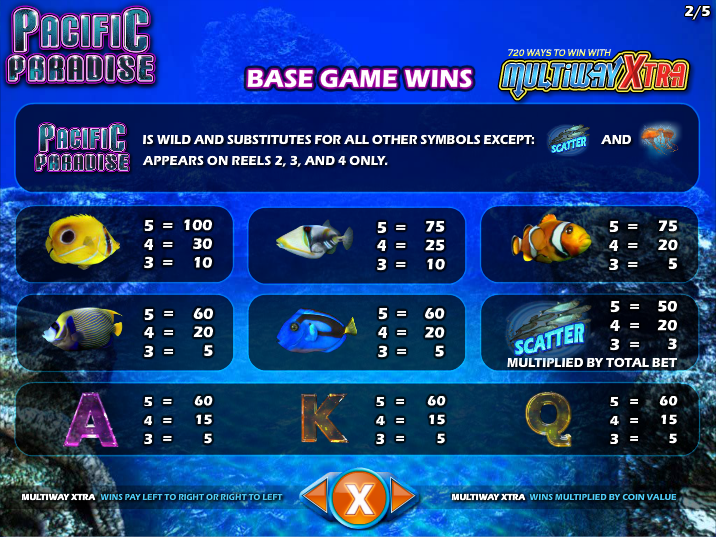 Once more it’s time to take a trip beneath the ocean waves to appreciate the marine wildlife in this classy online slot from IGT. It’s called Pacific Paradise and it has a 3D design which marks it out as a little different from the norm; it also features a free spins bonus, ‘dual symbols’ and IGT’s Multiway Xtra payline structure.

Pacific Paradise is a five reel slot with three rows and the Multiway Xtra feature; this means 720 winning combos can be formed as long as there are matching symbols in adjacent reels starting from the left or right hand sides.

The game looks great with a very realistic undersea setting and rather than reels the symbols float in columns through the dark blue seawater. Various other creatures zip back and forth through the briny depths and there’s a twinkly soundtrack to keep things interesting.

Six different tropical fish represent the high value symbols – we don’t know the species but you can see them on the paytable. Q, K and A make up the lower values.

The wild symbol is the Pacific Paradise logo, it appears only on reels two, three and four and can be stacked; the scatter symbols is a shoal of fish and the bonus icon is a little group of jellyfish.

Some of the base game fish symbols feature two fish in one; these count as two symbols for payout purposes so there are more winning opportunities.

This is triggered by landing five of the jellyfish bonus symbols on adjacent reels and for this you will receive ten free spins. There are more wild symbols during this round and it’s also possible to trigger more spins by landing five more jellyfish on the reels.

Pacific Paradise is probably one of the best ocean-themed slots we’ve played, at least in terms of looks and gameplay. There are lots of little graphical extras (the reels spin upwards rather than downwards) as well as several bonus features to enjoy and an RTP of 92.42% to 96.43%.