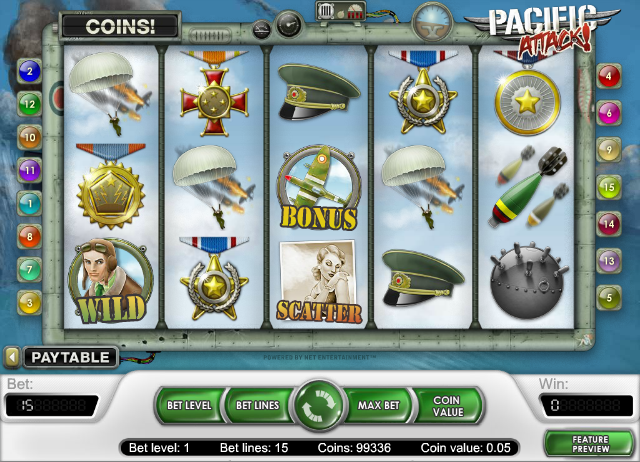 We’re heading back in time and half way around the world to the Pacific Ocean for this online slot from Net Entertainment. Pacific Attack! tells the tale of the battle for supremacy of this vital region between the Americans and the Japanese in the Second World War and it features an innovative Battleship-style game as one of the bonus games.

Pacific Attack! has five reels and fifteen paylines and it’s mostly a game about aerial warfare with some nautical mines thrown in for good measure. The game screen looks great, with loads of attention to detail around the edge of the reels and each of the symbols are theme-related.

The less valuable symbols are four campaign medals but higher up the scale there’s a officer’s cap, bombs, a parachutist escaping from a burning plane and a mine.

The scatter symbol is a photo of a pilot’s sweetheart, the pilot is wild and there’s an aeroplane bonus which activates one of the features.

This is good fun and to trigger this you’ll need to land three or more of the bonus symbols on an active payline. Next, press the ‘Bombs Away’ button and a bombing raid will take place over a 10 x 10 grid, hopefully hitting one or more of the ships hidden on that area.

You will now be offered a range of choices of further bombs as follows:

You can now pick the squares you would like to bomb, following the lead of any hits that were successful in the first wave. Each hit and each complete ship sunk will award coins.

Land three or more of the sweetheart scatter symbols anywhere on the reels to trigger the following number of spins:

During this feature all wins will be tripled and landing three more scatter symbols will add more spins to your total.

Although it’s more fun to choose the larger number of bombs when playing the bonus game, if you can narrow a hit down to 1 – 4 places, it’s probably worthwhile going for the Attack or Fighter options to make your successful hit more valuable.

Two bonus games, great graphics and sound effects – what’s not to like here? Play the Battleship bonus strategically and it may also turn out to be a profitable diversion.