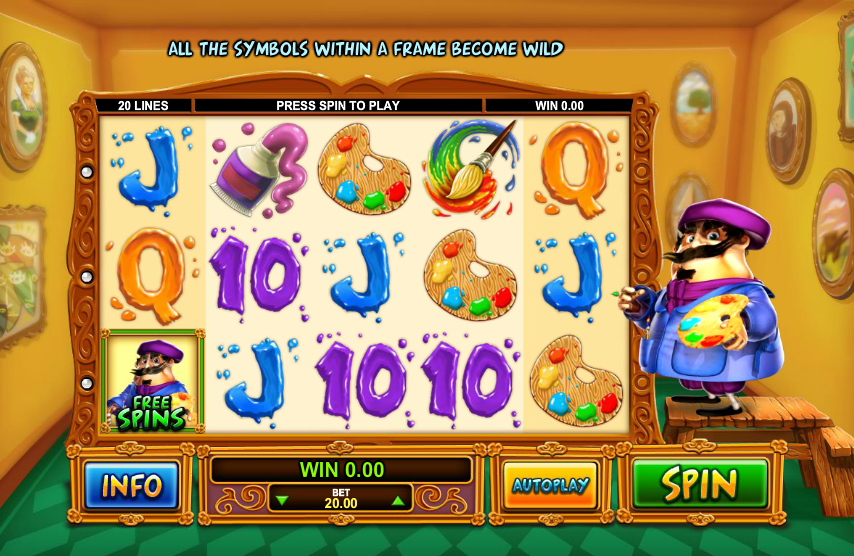 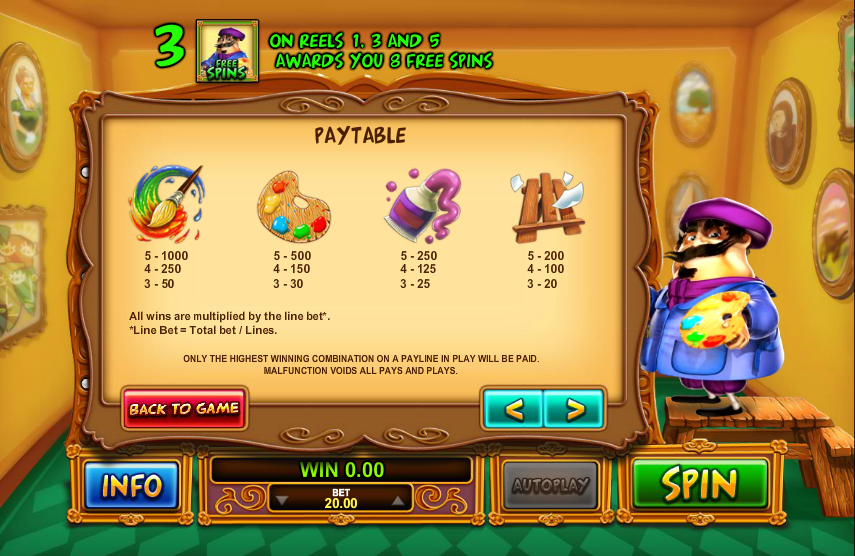 Over the years we’ve played some online slots with odd titles but here we have a clear contender for the most mangled pun – it’s called Pablo Picasslot and obviously it’s based on the life and work of the influential Spanish artist Pablo Picasso. Picasso died in 1973, several decades too early to see his name on the spinning reels but we assume he would have been delighted with the result. Read all about this Leander Games slot below.

Pablo Picasslot is a five reel slot with three rows and twenty fixed paylines; the man himself stands to the right of the reels, brush in hand in front of the easel which contains the reels. A number of portraits adorn the walls in the background.

The four high value symbols are a paint brush, an easel, a tube of purple paint and an easel; 10, J, Q, K and A make up the lower values.

The wild is explained in a bit more detail below but there are two bonus symbols – the chest and Picasslot – which activate separate features.

When you spin the reels you will notice frames of various sizes appearing on the reels; they can cover up to nine symbols and when they land all icons inside that frame will turn wild, hopefully providing some big wins.

This is triggered by landing three of the chest bonus symbols on reels two, three and four; all you have to do is keep picking paintings to reveal keys – once you’ve collected three matching keys, one of the chests on show will be unlocked to reveal a prize.

Trigger this by landing three of the Picasslot symbols on reels one, three and five; you will be awarded eight free spins and on each spin you will be guaranteed to see a ‘Painted Wild’ frame.

Pablo Picasslot may be an odd title but it’s good fun to play with some colourful graphics and cheery animations. The bonus features generally offer something different and they aren’t too tough to trigger. The RTP is 94.66%.