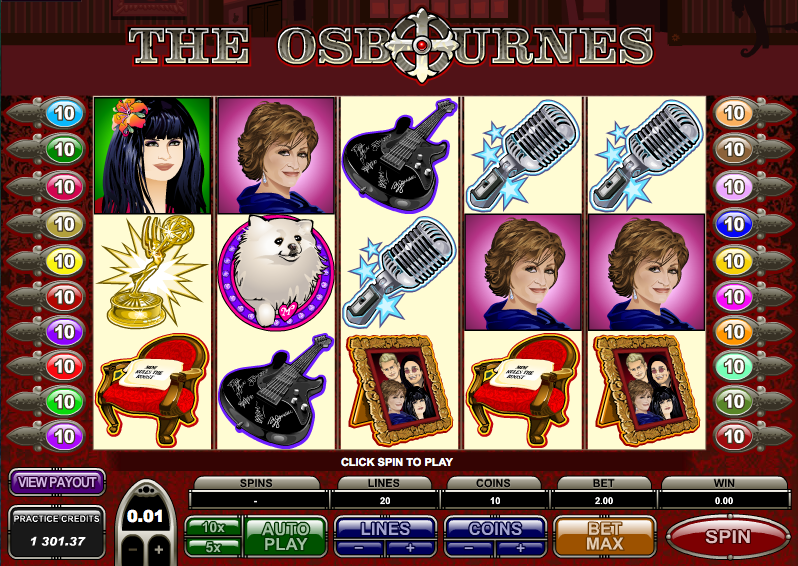 What we have here is an online slot machine from Microgaming based on a reality television show featuring the ever-so-slightly oddball Osbourne family. The patriarchal figure in this household is the one and only Ozzy Osbourne, lead singer of Black Sabbath and so we would argue that there are worse subjects on which to base a game. All the Osbournes are present and there’s also several creative bonus games.

The Osbournes pays out over five reels and twenty paylines and refreshingly all the symbols are related to the theme. Offspring Jack and Kelly are here as well as Sharon and Ozzy and there’s also a microphone, a picture frame, a guitar and an award.

There are several bonus symbols which trigger the features and these include Mini the dog, an ornate door knocker and a metallic Osbournes logo which is the wild.

Let’s start with the dog then and three of this scatter symbols anywhere on the reels will reward you with ten free spins and a 2x multiplier.

That’s a good start but there’s more – you will notice a trail during this feature with a member of the Osbourne family at five space intervals. Each time Mini lands on reels two, three or four you will move one place along the trail. Reaching a member of the family will award a prize and reset the spins to ten.

Three or more of the door knocker scatter symbols anywhere on the reels will award this feature; all you need to do is pick one of the knockers on the reels and you will win a random multiplier of your stake of up to 5x.

This feature is awarded randomly and your task is to stop the flashing light on the gift that takes your fancy. There are four – one for each member of the family – and they are worth differing multiplier amounts up to 30x your stake.

This slot is good fun – the background music is suitably rock-like, there are some nice animations and all the different bonus features mean that you won’t get bored too quickly.