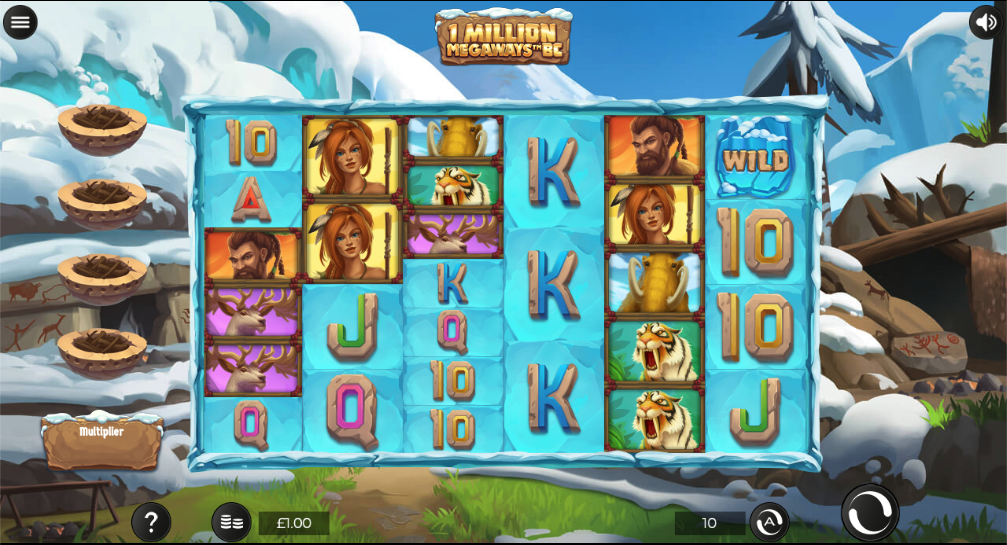 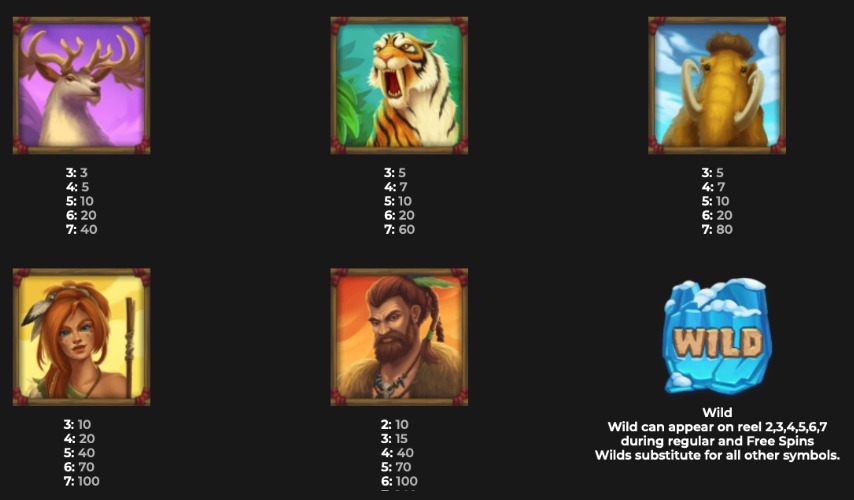 Historically speaking humans have only been around for 200,000 years or so but let’s enjoy some creative licence here as we try out One Million Megaways BC, an online slot from Iron Dog Studios which promises a vast number of paylines courtesy of Big Time Gaming, free spins and win multipliers.

One Million Megaways BC is a six reel slot with up to seven rows and a potential 117649 paylines if all seven rows are in play at once; there’s a chilly scene behind those reels in which snow clings to the rocks and branches but there’s also a cosy cave warmed by fires.

High value symbols include the male and female characters from this story, a wooly mammoth, a sabre-toothed tiger and a moose; 10, J, Q, K and A represent the lower values. The ice block is wild, it appears everywhere except reel one and it will replace all standard symbols.

One Million Megaways BC Bonus Features

Always a popular feature, this sees any symbols in a winning combo disappear and be replaced by more falling in from above; new combos can the be formed to continue the process. Successive wins will increase the win multiplier to 2x, 4x, 6x and finally 8x in the base game.

This is triggered by completing at least four successive tumbles in one spin and these will be marked by the four fires lighting on the left hand side; you’ll receive 8 free spins for four tumbles and an extra 2 spin for each subsequent tumble up to a maximum of 14.

There’s an extra 9 symbol reel inserted during this round which means a potential 1,058,841 paylines if all rows are maxed out; if any of the original reels land with seven rows in view then they’ll continue to have seven rows on each spin after that. If the central, nine row reel lands with all nine rows it will also spin with nine after that, in addition to awarding an extra five free spins and +1 to the win multiplier.

During this round the multiplier remains in force from the previous win without resetting .

There’s a new wild which appears on the central reel which will be ‘sticky’ meaning that they’ll remain on the reels, falling to the lowest possible position if other symbols disappear during a win.

One Million Megaways BC takes the clever paylines concept and squeezes in another reel to crank the action up little it more so what’s not to like? An entertaining theme, tumbling reels and more than a million paylines – give it a go!