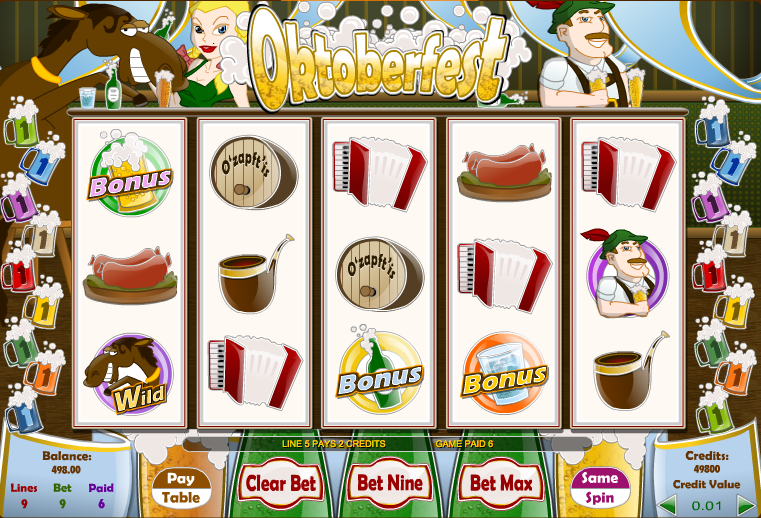 As far as we’re concerned there aren’t enough online slots based on beer and sausages; fortunately Amaya Gaming have come to the rescue with Oktoberfest, a game with the famous Munich beer festival as it’s theme. Regular visitors to our site will be aware of one similar game though and that’s Bier Haus, WMS Gaming’s classy addition to this very small genre.

Oktoberfest is a much more basic affair than Bier Haus but that’s not always a bad thing; it plays out over five reels and nine paylines. The backdrop to the reels are two characters in traditional Bavarian costumes plus a grinning horse presumably enjoying a cold weissbeer.

All the symbols are recognisable from any number of German stereotypes and include an accordion, a flugelhorn, some sausages, a beer barrel, a traditional cap and our male and female leads. There are three different bonus symbols all featuring alcoholic drinks and a horsey wild.

There are three bonus symbols but only one feature and to trigger it you’ll need to match three or more of those drinks on adjacent reels. There, four or five will reward you with a 1x, 2x or 3x multiplier.

It’s a simple game and you’ll be taken to a screen displaying a number of beer barrels; all you need to do is keep opening barrels and collecting multipliers  until you find the one which reveals ‘Collect’. If you find that one on the first pick you’ll win the biggest prize.

The grinning hors will substitute for other symbols to create winning paylines but it can also make a combo with the two different characters.

There are only nine paylines so select them all unless you’re a really low roller; the more paylines, the more action even if the RTP remains the same.

Frankly, if you want to play an Oktoberfest-themed slot, then Bier Haus is probably the one to go for but there is some enjoyment to be had here if you’d like to add to your collection of beer-related games.