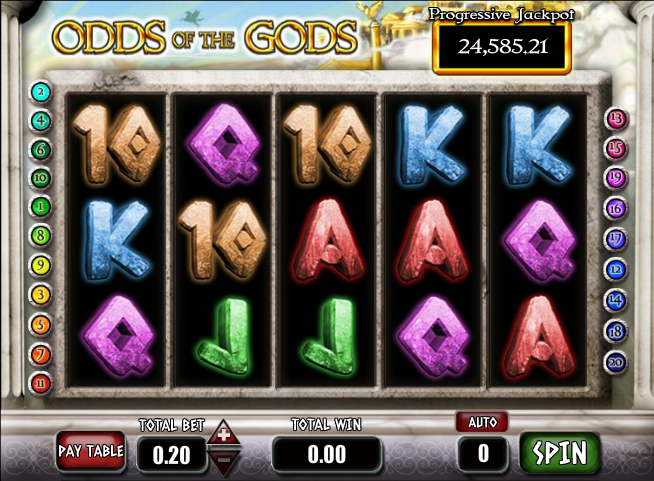 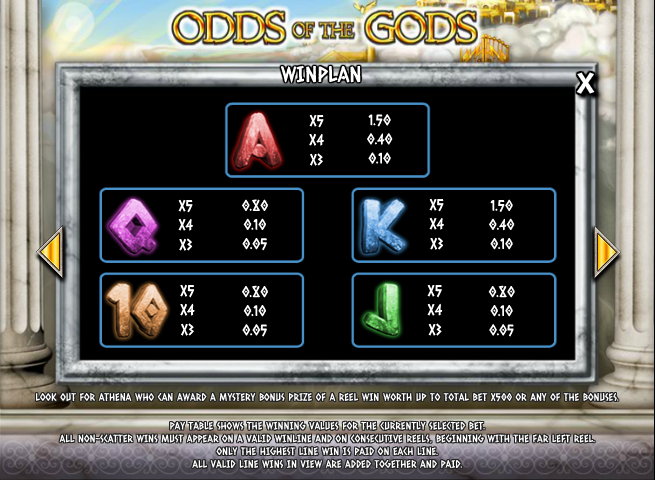 As online slots fans we’re never too far from a Greek god or two and once more we have the chance to reacquaint ourselves with these legendary characters. This game is called Odds Of The Gods, it’s developed by Mazooma and it comes with a veritable cornucopia of bonus features, not too mention a progressive jackpot.

Odds Of The Gods is a five reel slot with three rows and twenty fixed paylines; those reels spin on a stone frame, possibly a part of some aerial structure with views of more temples and clouds on the distance.

The only standard symbol related to the theme is Athena and she is joined by 10, J, Q, K and A as the lower values.

The wild symbol is a flash of lightning and it will replace all others except the three bonus symbols – they are Zeus, Hermes and the shield.

This is triggered by landing three or more of the Zeus scatter symbols anywhere in view and you will get to play a game in which you progress along a trail by selecting a shield. ‘Move’ moves you along the trail, ‘Collect’ ends the round with the specified prize and a diamond awards the progressive jackpot. Make it to the end of the trail and you get to open a golden chest which will award a total bet multiplier of up to 500x or the progressive jackpot.

Trigger this by landing three or more of the Hermes scatter symbols anywhere in view and you will be awarded a random bet multiplier of up to 500x.

This is triggered by landing three of more of the shield scatter symbols anywhere on reels two, three and four and you will be faced with a circle of spinning shields. When they stop you will be awarded a multiplier of your total bet up to 500x. If lightning also strikes that shield you will win the progressive jackpot.

This is randomly occurring in the base game and you may be lucky enough to receive a bet multiplier of up to 500x or entry into one of the bonus rounds.

Odds Of The Gods is not the most graphically sophisticated game out there but it’s good fun and offers lots of different bonus features; the dramatic background music should keep things interesting also.