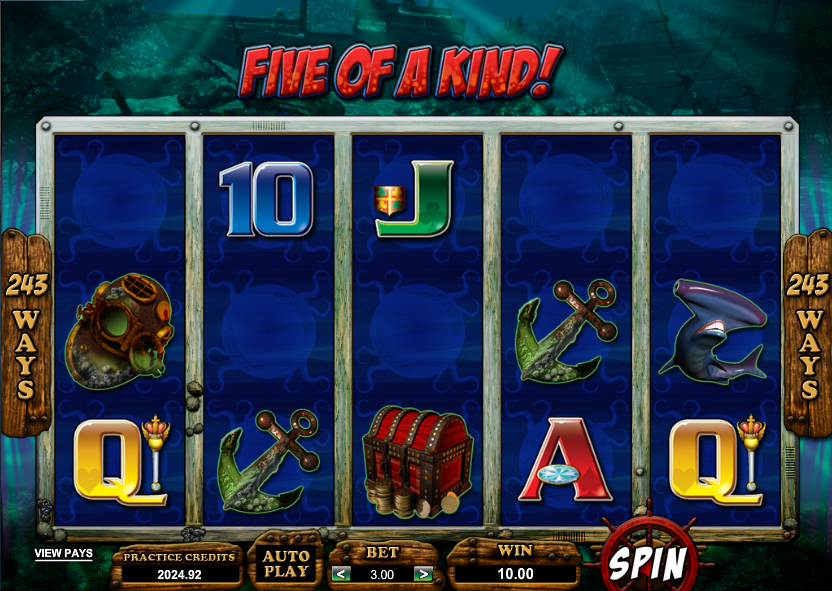 Dive into the murky depths to meet an array of undersea creatures and objects in Octopays, Microgaming’s online slot which features a cute octopus as the main character in a game who’s main attraction is the Kraken Feature bonus game.

Octopays is a five reel and 243 payline slot in which the backdrop to the reels are an underwater landscape featuring a sunken boat; Microgaming‘s standard playing cards are used as the lower value symbols but an array of watery objects make up the higher values.

So we have a barnacle-encrusted green anchor, a happy-looking hammerhead shark, w well-worn diving helmet and a treasure chest surrounded by gold coins.  Our little octopus is the wild symbol and also the trigger for the bonus feature; in the bonus game there’s an extra black octopus symbol which comes into play.

For most players this game will be based around the Kraken Feature – the Kraken was the legendary giant squid said to destroy ships in Scandinavian waters – and you can trigger it by landing the octopus symbol on reels two and four in one spin.

You will now receive 12 free spins and before each spin some gigantic Kraken tentacles will place up to four octopus wild symbols on the reels (except reel three).  This obviously helps you create winning combos but that’s not all; if the black octopus appears on screen he will ‘ink’ any octopus symbols which have been part of a winning combo, multiplying the win by two.

Rather than just pay along normal paylines, 243 way wins means that there are lots more winning options; wins are paid from right to left as well as left to right and symbols only need to be in adjacent paylines to form a winning combo.

Octopays is a fairly standard slot from the Microgaming stable but in our experience the bonus features seems to get triggered pretty regularly.  The cheerful sound effects create a nice gaming atmosphere meaning this is a slot which is well worth a short diversion.