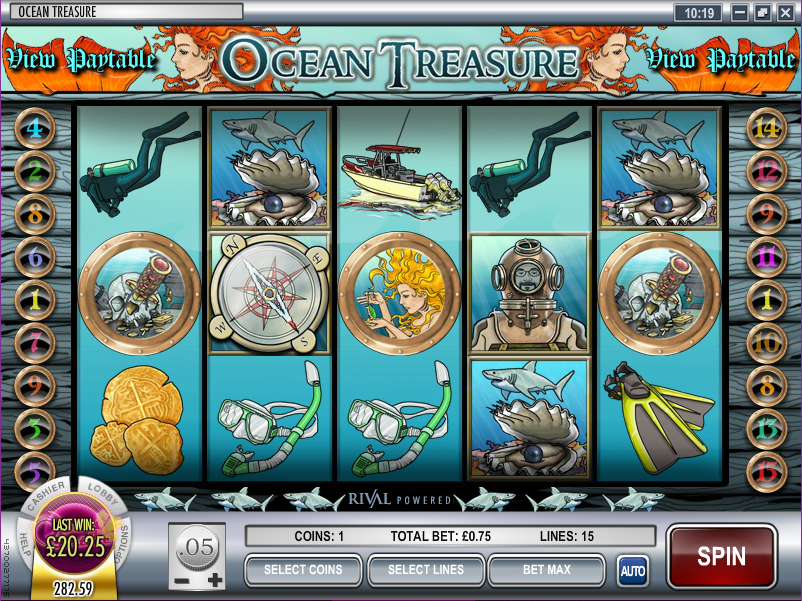 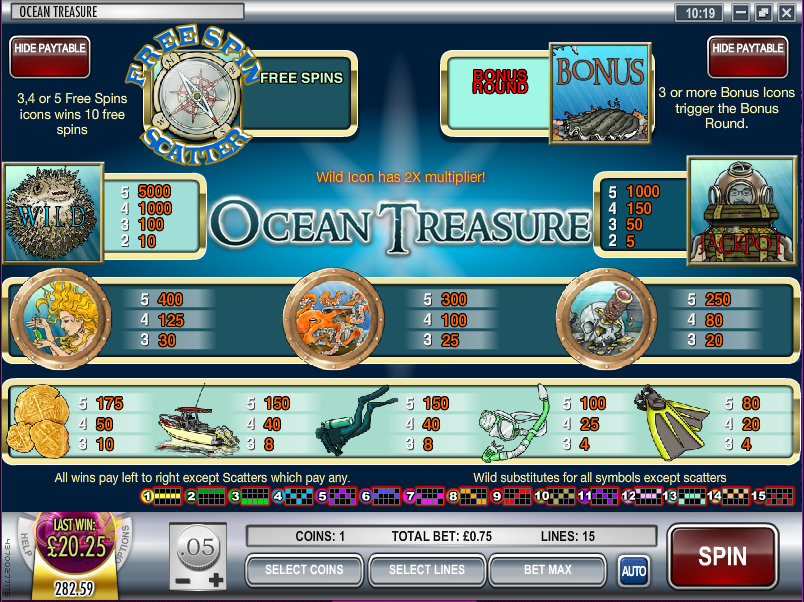 One of the most popular themes on which to base an online slot is that of the ocean; we’ve played and reviewed dozens of games set around the briny deep and now there’s one more to add to that crowd. It’s called Ocean Treasure, it’s from Rival Gaming and it features two fishy bonus rounds to keep everyone amused during those long days at sea.

Ocean Treasure is a five reel game with with up to fifteen paylines and the narrative is one of deep sea divers searching for treasure beneath the ocean waves. Portholes on the reels make you feel as if you inside a boat looking outwards.

Watery symbols are the order of the day here and include flippers, mask and goggles, a scuba diver, a diving boat, an old coin, a skewered skull, an octopus, a mermaid and the man in the traditional diving suit who is worth 1000x the line stake for five on an active payline.

A Puffer fish is the wild symbol and there are two scatters – a compass and a shark/oyster – which activate bonus games.

Grab yourself ten fishy free spins by landing three, four or five of the compass symbols anywhere in view. Any thing you win during this round will be multiplied by 3x and it’s also possible to trigger more spins by landing 3x more scatter symbols.

This mini-game is triggered by landing three, four or five of the shark/oyster symbols anywhere in view. You will now be taken to an instruction screen and then on to another view displaying a number of oysters. You can pick as many oysters as symbols which triggered the round and each will reveal a pearl which is worth a prize.

If you’d just like to go for the bonus games then playing with just one payline give you the same chance of doing so and save you money. You will however win proportionately less.

This is a slightly run-of-the-mill slot which could benefit from a more creative bonus feature than just selecting oysters. The graphics are reasonable good though and it compares well against many similarly-themed games.