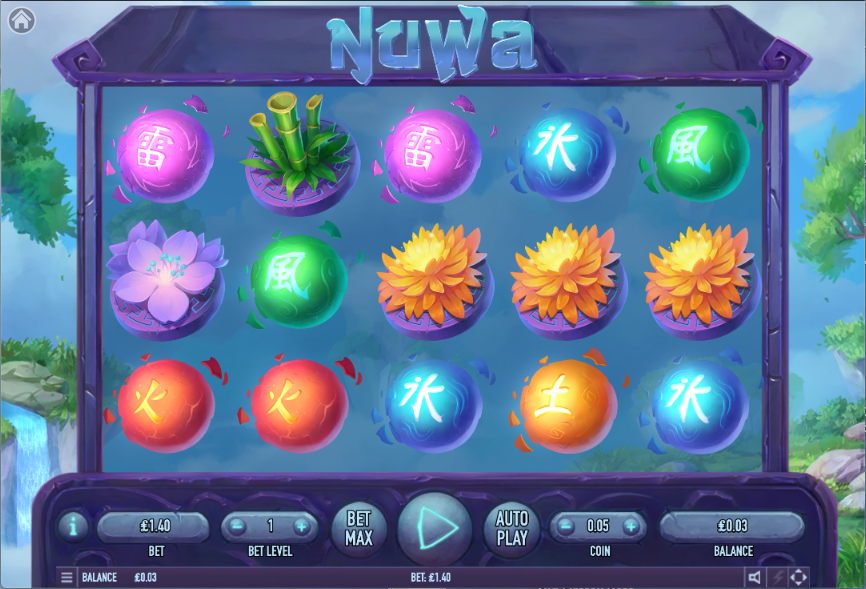 Delicate pastel colours, bamboo and lillies suggest that we are taking a virtual trip to the east to run the rule over this online slot machine from Habanero Systems; it’s called Nuwa and it offers players expanding wilds and a bonus feature within the free spins round.

Nuwa is a five reel slot with three rows and twenty eight fixed paylines; there’s a gentle soundtrack to accompany the gameplay which consists of symbols floating against a transparent backdrop through which we can see trees and waterfalls.

The high value symbols include some sprigs of bamboo and three pretty flowers in purple, pink and orange; five coloured symbols inscribed with Chinese characters represent the lower values.

The girl with the snake’s tail is wild, she appears only on reels one and three and she’ll replace all other symbols except the purple snake scatter to help form winning combinations – she’ll also expand to cover all positions on her reel.

This is triggered by landing at least three of the purple snake scatter symbols anywhere in view for which you’ll receive an initial eight free spins; during this round your task is to collect one of each of the coloured, low value symbols and this is achieved by when they appear in winning combinations.

Once all five colours have been collected you’ll receive another five free spins with the wild symbol guaranteed to appear in view twice on each spin and all wins subject to a 2x multiplier.

Nuwa is a lovely looking slot with some enchanting gameplay and a bonus feature which offers something a little extra to the luckier players – if that’s you then this is the slot to try!