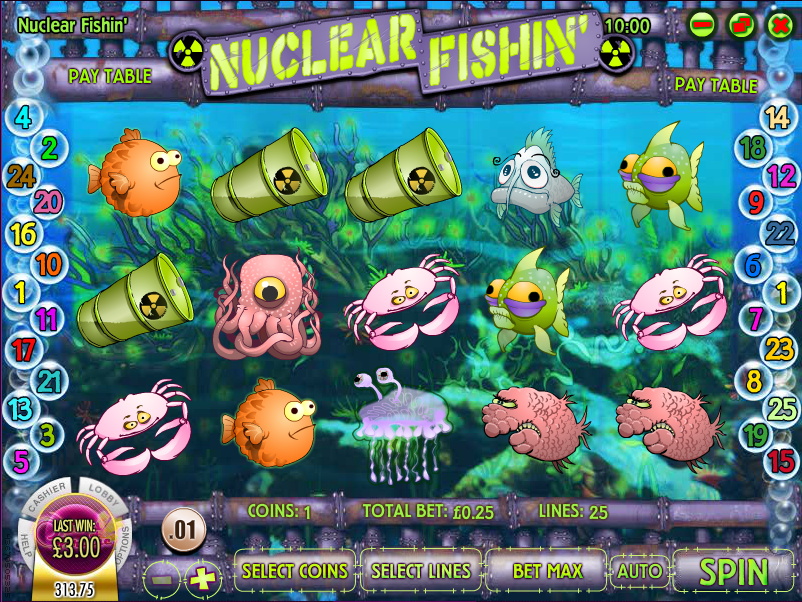 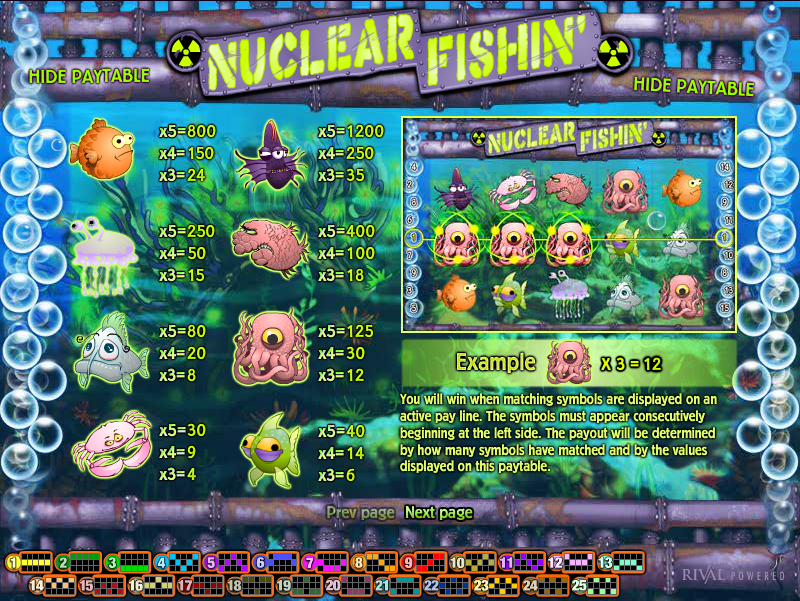 The intro movie to Nuclear Fishin’ is a cheerful scene showing a ship dumping nuclear waste overboard where it settles on the ocean floor. A fish then approaches the spill where it swiftly gains an extra eye to match the one in that famous episode of The Simpsons. The tone is then set for this colourful and toxic online slot from Rival Gaming.

Nuclear Fishin’ is a five reels slot with twenty five paylines and it’s all set underwater where our fishy friends try to avoid contact with radioactive waste. The backdrop to the reels is a living reef, as yet unspoiled by any industrial sludge.

The main symbols are all fish and they’re all quite ugly, suggesting that they’ve already been contaminated. The more recognisable include an octopus, a crab, a jellyfish and and that three-eyed puffer fish. The most valuable symbol is a red depth charge displaying a radioactive logo.

Special symbols are a wild diver and two scatters – a barrel of waste and a seahorse – which activate bonus games. The wild appears on reels one, three and five and will expand to fill the whole reel if it can make a winning combo.

The wonky-eyed seahorse is the key here and you will need to land three or more of him anywhere on view to win the following:

All wins will be multiplied by 3x and it’s possible to earn more spins by landing more scatters during this feature.

This is where you get to do your bit for the undersea world and you can kick things off by landing three, four or five of the radioactive barrels anywhere in view. You will now play a bonus game in which you must catch barrels as they descend to the sea bottom and drag them into a vacuum tube where presumably they are sucked somewhere less harmful.

It’s a pretty easy game and you can grab plenty before the timer runs out, after which a coin prize is awarded. Check it out in the video above.

The Bonus Barrels game is quite easy so tips are not really necessary but get your mouse finger ready as the barrels do drop quite quickly.

Despite the serious subject, Nuclear Fishin’ manages to be an amusing game and at least you get the chance to clean up the seabed during the bonus game. The animations are nice and there are little added extras such as the barrel which occasionally drift from top to bottom after a win. Sound effects are a little bit odd.