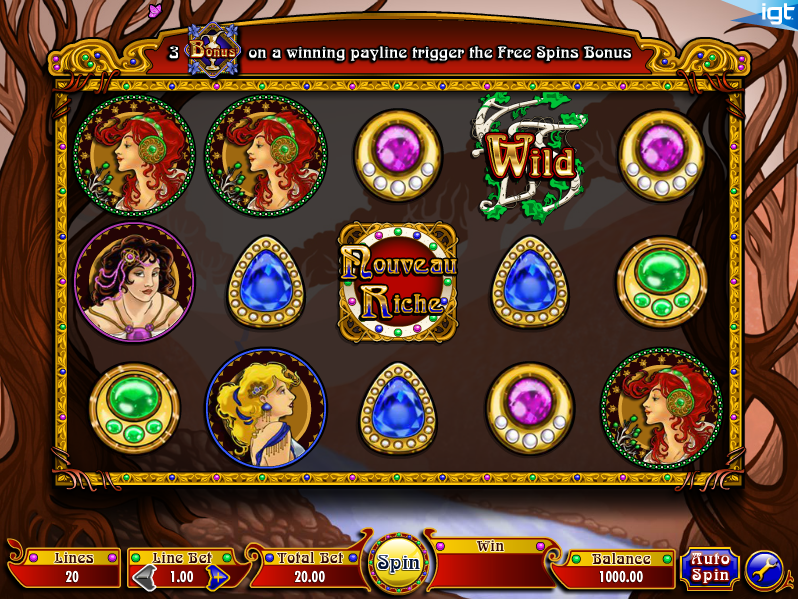 We always feel like we’re off to a good start if a new online slot has some historical context and that’s the case with Nouveau Riche from IGT. The term refers to those who have acquired wealth themselves rather than inherited it and this game is placed in the 1920s/1930s, an era of dynamism, capitalism and of course the great depression.

Nouveau Riche is a five reel and twenty payline slot with a very artistic background of stylised trees and a flowing blue river. The lower value symbols are pink, blue and green jewels but the more valuable ones are three female musesin period dress. There’s also a Nouveau Riche logo which is worth 5000x your line stake for five on a payline.

There’s a leafy wild symbol and a bonus symbol which only appears on reels one, two or three and which will activate the feature.

This is one of our favourite extras and it’s always a pleasure to see it in a game we’re reviewing. Essentially every time you create a winning combo, those symbols involved will disappear and be replaced by more dropping down into the empty spaces. The reels will then be re-evaluated and if you’ve won again, the same thing will happen again.  It’s almost like getting a free spin every time you land a win.

The vase bonus symbols only appear on reels one, two or three and you need to land them on an active payline to trigger this feature.

The first thing to so is click on one of the three muses which appear to give you an initial number of spins. During the spins a ‘+1’ symbol appears on reel three and if you land it it will add one more spin to your total. The game is over when you’ve run out or spins you reach 100.

Paylines are fixed here so we can’t really offer any advice except to set the Autoplay, sit back and watch the Freefall feature do the business.

This is a good-looking slot with some nice features which should appeal to most players. Stop by for a few spins!